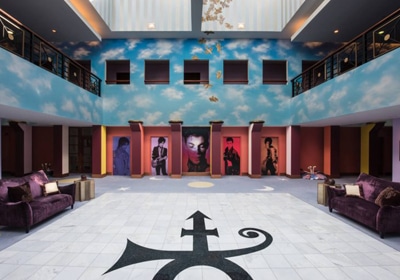 Two of the three new tour experiences will be exclusive for VIP ticket purchasers, which currently run at $100 a piece.
November 21, 2016

Fans looking to take on the full Prince experience—including the chance to record in his studio and even eat his favorite foods—during their visit to Paisley Park will soon be given the opportunity.

The Chanhassen-based museum announced on Thursday an expanded offering of tour packages that will start in December. A release from Paisley Park states the various themed tours were created with the goal of “evoking the activities and special events that Prince would often host.”

Each experience is slated to a day of the week. The three new experiences include:

Studio Experience (Thursdays): VIP ticket holders will be allowed to record live vocals over a short segment of a Prince song in his Studio B control room, which is where songs from Sign O’ The Times, Graffiti Bridge and Emancipation were recorded. Patrons will be given their recording on a USB stick to take home.

Paisley Park After Dark Experience (Friday and Saturday evenings): Starting at 6 p.m. on Fridays, the museum will host a dance party with a DJ from Prince’s private NPG Music Club. Movie nights will be held on Saturday evenings and are said to feature different Prince movies and videos, including rare performance footage.

Brunch Experience (Sundays): VIP ticket holders will receive a special meal in the NPG Music Club, which will be set to the tune of Prince music, videos and include “many of his favorite foods.”

In sync with the expanded tour offerings, Paisley Park also launched its online merchandise store with new apparel and accessories.

These efforts mark the latest step that Prince’s estate has made to draw in visitors after Paisley Park was official classified as a museum in late October.

In early November, Prince’s estate announced it had locked down a deal with Universal Music Group for exclusive distribution rights of the music in Prince’s vault. The extent of what exists in that vault, however, has not yet been disclosed.