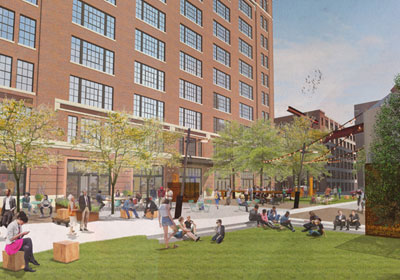 Fast-growing digital marketing and analytics firm Ovative/group is planning to relocate to a new office project in the North Loop area of Minneapolis, which has been drawing tech and startup companies. It will be a short move: Half a block, to be precise.

Ovative has pledged to invest $2.1 million on the buildout of its new space and add 100 new jobs with the move. The company will land a $605,000 grant from the state’s Department of Employment and Economic Development. The firm will not receive the state dollars, from DEED’s Job Creation Fund, until it has met its investment and job creation commitments.

Bloomington-based United Properties plans to redevelop the 729 Washington site; the mixed-use project would be anchored by a new office building. United Properties is Ovative’s current landlord at the Loose-Wiles building, a vintage property that the developer renovated.

According to documents filed with the city of Minneapolis, United Properties is currently proposing a 10-story building with 184,600 of office space on the site.

Project details are not finalized. The developer will have to pre-lease a substantial amount of the building before it would start construction. By itself, Ovative’s lease for 30,000 square feet is not enough for United Properties to start moving dirt.

The Minneapolis-based ad agency, which was founded in 2009, currently has 80 employees. Ovative posted $9.9 million in revenue for 2015, nearly double its $5 million in 2013. The company expects its revenue to double again by the end of 2017.