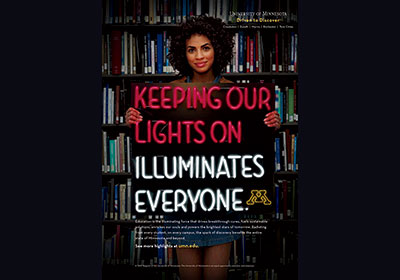 Olson Helps Sell The U Of M In Ad Campaign

Olson is tasked with reminding Minnesota that the U is more than just a cost item on the state budget.
September 05, 2013

The University of Minnesota is used to media columnists—as well as restive fans—questioning its direction. But the columnists are usually contained to the sports page, and the fans to the games. Over the last year or so, however, these sorts of stories jumped to the front page and opinion section. And they weren’t about athletics, but academics and the costs associated with running a world-class research university.

Concurrent with the controversy, an ad campaign with the tagline “Driven to Discover” was on the air in the Twin Cities and Rochester TV markets (and nationwide when the Gophers get Big Ten Network exposure). It reminded Minnesotans of the value of having a land-grant university focusing on innovation.

“Driven to Discover” put the U in a different light, literally. “We’ve used the symbol of light, which illuminates not only our students, but the world beyond,” says Ann Strong, account director at Olson, which created the account. Olson, which has more than 400 employees, reports revenue of $91 million and media billings of $165 million. (Disclosure: My brother is employed by Olson, and I teach at the U part time.)

“Illumination: That’s the power of education” begins one 45-second spot. In it, a rolled-up diploma becomes a flashlight. Flashbulbs pop as a U researcher in a lab coat stands before a PowerPoint presentation that says “Medical Breakthrough.” A cellist plays under a chandelier hanging from a tree. “Dim our lights, and Minnesota becomes less brilliant. Keep them lit, and the darkest challenges fall to the greatest light—the light of discovery,” the spot concludes.

It’s inspiring, above-the-fray creative. And it’s intended for key constituencies, says Strong. Like all land-grant universities, the U depends on public support. Perceptions that this public investment is not being spent as efficiently as possible can create challenges, even for one of the state’s iconic institutions. Strong says the campaign’s mission “is to raise awareness and understanding of what a research university brings back to the state, because it does depend on the support of the Legislature and the people.”

Beyond the 45-second ad, 30-second versions, as well as print and online executions, were created; Olson declined to reveal overall ad buy costs. Strong says the campaign will continue and will kick off a new series of spots this fall—just in time for a new semester and a few months before a new session at the Legislature.