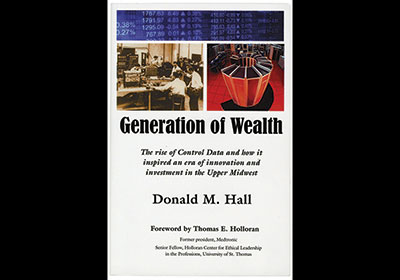 "Generation of Wealth" chronicles the rise of Control Data and a time when capital flowed freely.
June 02, 2014

While Mad Men captures the allure of the New York advertising scene in the 1960s, a new book reveals a local drama of the same vintage, when the Twin Cities was briefly the nation’s high-tech hub. Local entrepreneurs wanted to change the world, and investors jumped at the chance to buy stock at $1 a share and finance new companies. Many had visions of easy money.

“It was the resurgence of animal spirits,” says author Donald Hall, borrowing economist John Maynard Keynes’ description of the era’s emotional mindset. Hall, a former stockbroker and Control Data employee, tells the tale in a book called Generation of Wealth: The rise of Control Data and how it inspired an era of innovation and investment in the Upper Midwest.

The seed for the book was planted in 1961 when Hall was a finance graduate student. A brokerage executive told him many local stocks had “crazy” (high) valuations. But the run-up in stock prices helped finance Bill Norris at Control Data, Earl Bakken at Medtronic and Seymour Cray, who was a big player at Control Data and later founded Cray Research.

At its zenith in 1981, Control Data employed about 60,000 people. In a TCB interview for this story, Hall says the company lost strategic focus and didn’t adapt to the rapidly changing computer business.

The region quickly lost its foothold in computing in the 1990s, and most high-tech companies are now clustered in Silicon Valley. But Hall notes that our large medical device industry also was launched in the period of unconventional capital, where money was raised at house parties and by selling stocks to friends and relatives. A former Control Data manufacturing plant in Arden Hills now houses the cardiac rhythm management business of Boston Scientific.

In the foreword to Hall’s book, former Medtronic president Thomas Holloran puts the evolution in context and raises a question worth pondering. He emphasizes that Control Data and other companies of its time found “capital was available to the persuasive entrepreneur.” In today’s marketplace, Holloran wonders, “whether our standards of risk have made us unduly cautious.”