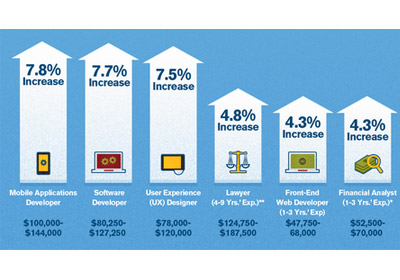 According to staffing firm Robert Half, the technology industry will see the biggest gains in professional salaries, followed by accounting and finance, and creative and marketing jobs.
October 25, 2013

While many federal government reports are on hold amid the shutdown, a newly released “salary guide” projects average U.S. starting salaries for white collar employees to increase by an average of 3.7 percent next year—with some positions seeing even higher gains.

The report, released by Menlo Park, California-based staffing services firm Robert Half, found that technology positions are expected to see the largest jump in salary, with an anticipated 5.6 percent increase for newly hired workers in 2014. Accounting and finance, 3.4 percent increase, and creative and marketing talent, 3.3 percent increase, follow the tech field, as the largest gainers.

While Robert Half didn’t break down how it expects the average salaries to increase by state, Jim Kwapick, the firm’s district president in Minnesota, told Twin Cities Business that Minnesota as a whole is expected to be slightly above the national averages in every category.

“Minnesota tends to be ahead of the curve in the job market; we’re usually about two points better than the national average for unemployment, which is a big factor in salary averages,” Kwapick said.

Changes to government regulations played a big role in the projected increases, especially in the health care sector due to the Affordable Care Act, according to Kwapick.

“We are seeing a lot of demand in the accounting and finance space. With all of the new regulations, companies are looking to hire more senior analysts, payroll specialists, and cost accounting positions,” he said. “And the Twin Cities has an especially large financial sector, with companies like U.S. Bank and Ameriprise looking for skilled employees in a competitive market.”

According to Robert Half, the job candidate pool for certain industries is smaller than many hiring managers believe and is driving starting salaries higher. The market for experienced accounting and finance professionals has tightened dramatically in many areas.

“Many hiring managers are encountering difficulty finding professionals with the specialized skills they need to achieve their growth goals,” Paul McDonald, Robert Half senior executive director, said in a statement.

According to the report, though general unemployment levels remain high, unemployment rates for a number of accounting and finance occupations are below the national average. Financial professionals who hold degrees and have specific skills seem to be frequently receiving multiple offers and counteroffers—thereby driving salaries higher.

Robert Half’s report did not look at blue collar or industrial type jobs. “The four-year degree unemployment rate is about half of what the overall rate has been; the accounting and tech spaces haven’t been hurt as badly overall,” Kwapick said.

Twin Cities Business examined how essential postsecondary education will be for job placement in the future for Minnesota in its October issue. Click here to learn more.

Baby-boomers are also getting closer to retirement age across the country, which Robert Half expects will have a big impact on hiring patterns when firms look to replace the experienced workers.

Robert Half looked at increases in starting salaries only; bonuses and other forms of compensation, such as retirement packages, were not taken into account.