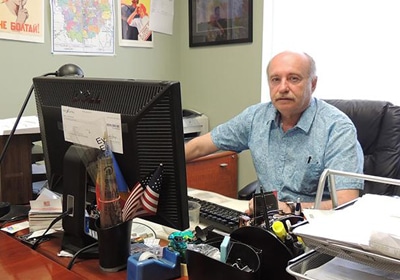 Mirror On The Midwest: Russian-Language Zerkalo Celebrates 25 Years In Minnesota

Zerkalo is one of many media outlets that reflect the various groups of people who have come to the state, either as immigrants or as refugees, in recent decades.
August 04, 2016

In the summer of 1990, while the Soviet Union faltered, Leonid Grichener left Moldova for Minnesota with $100 in his pocket, a doctorate in pre-press processes and notions of publishing a newspaper.

A few months later, he printed an eight-page newsletter and handed out 50 or 60 free copies to other Russian expatriates in suburban Plymouth. “I was surprised there was no media” for them, he said.

Over time, Grichener expanded that newsletter into a media business, Zerkalo, Inc., that today puts out four publications, including its flagship, a glossy magazine also called Zerkalo (a Russian word that means “mirror”) that is celebrating its 25th year in print. The company also publishes two newspapers – North Star and Our Home-Minnesota (the state edition of the national publication Our Home-Russia) – as well as a directory of Russian businesses.

Celebrate culture, create discussion
Grichener said his magazine and newspapers are politically independent “community publications” that help Russians celebrate their culture while navigating American life. “The goal is to give people some information and to create discussion,” he said.

A recent issue of Zerkalo – billed as “The Russian Language Magazine of the Twin Cities” – included poetry, book reviews and contributions from readers about their World War II experiences. Meanwhile, the May issue of North Star, which publishes national and international news, provided coverage of presidential candidates Donald Trump and Hillary Clinton. And the April issue of Our Home-Minnesota, which includes local and state news, reported on Prince’s death.

All of the publications are printed in Russian, with some stories translated into English on the company’s website.

One of many such media outlets
Zerkalo is one of many media outlets that reflect the various groups of people who have come to the state, either as immigrants or as refugees, over the past few decades. A media guide published by the Twin Cities Media Alliance lists about 30 newspapers and websites, 35 radio stations or programs and 20 TV stations or programs related to recent immigrant or refugee groups, such as Latinos, the Hmong and Somalis.

Like the immigrant press in Minnesota’s early years, many of these media outlets have small budgets and staffs – and struggle, as time passes, to remain relevant to younger generations.

The Asian American Press, based in St. Paul, has served the Hmong, Laotian, Cambodian and Vietnamese communities since 1985. The paper had a free circulation of 15,000 at its high point but has gone strictly online – a move that saved money and also recognized the habits of young news consumers, publisher Nghi Huynh said.

Hassan Eibakar, a veterinarian who was born in Somalia, published the Warsan Times for about a dozen years before health problems led him to shutter the publication. The four-page, free newsletter, devoted to news for the East African diaspora, was distributed at libraries and shops around the Twin Cities.

Eibakar, who ran the paper out of his office in Minneapolis, said the idea behind publication was simple: to provide Somalis with some news and resources when they arrived in Minnesota. “The purpose was to enlighten immigrants on the American way of life and how to deal with the American system, the law and so on,” he said, “and also to help them to address where to go for anything – for health, for school, everything,” he said.

Seeking ways to reach young people
On a steamy morning in June at the offices of Zerkalo, in a strip mall, Grichener sat at his desk and discussed his publications. Russian-era propaganda posters (“a bit of nostalgia,” he said with a smile) hung on the wall.

Two editors write most of the articles for the publications, while part-time writers and subscribers also contribute articles and photos.

Grichener, too, is trying to make better use of discussion forums and other online tools so that Zerkalo will reach the next generation, which includes his 20-year-old daughter.

“Young people know Russian history and culture. They can speak Russian,” he said, “but they are now completely absorbed into American culture.”