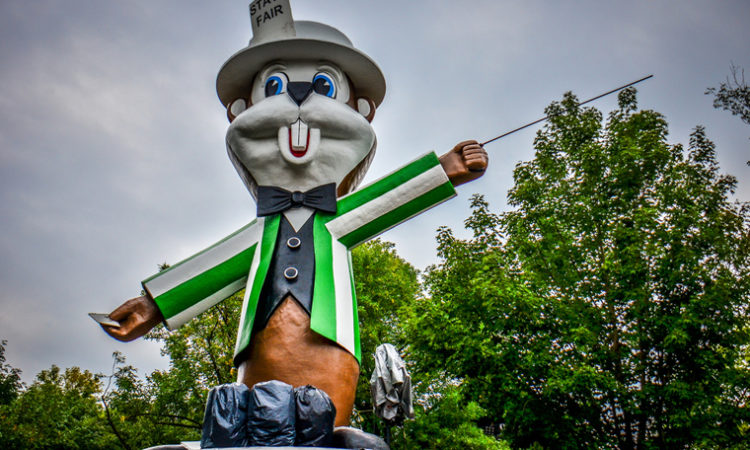 The improvements include updates to existing attractions, as well as investments in infrastructure that will help the “The Great Minnesota Get-together” bring in state-of-the-art traveling exhibits.
By Jared Goyette
January 16, 2018

The Minnesota State Fair’s plan to spend $7.2 million on capital improvement projects this year is about preserving a sense of familiarity while also preparing for the future, the Fair’s general manager Jerry Hammer explained Tuesday.

The improvements include updates to existing attractions as well as investments in infrastructure that will help the “The Great Minnesota Get-together” bring in state-of-the-art traveling shows that require more robust fiber optic and electrical capabilities.  Another $3.8 million will be spent on maintenance projects.

“We're really investing significant resources in not only changing it for the coming fair but also laying the groundwork for more change,”  Hammer told TCB on Tuesday.

Fairgoers might notice some of the upgrades, like a new building for the pet exhibit that uses a more open design, incorporating an outdoor courtyard area. This means more room for demonstrations and lower temps for animals and humans alike.

Less visible will be the $1.5 million that the fair intends to spend on electrical upgrades. While some of aspects of the , like broader pedestrian walkways or new landscaping, will have an immediate impact, Hammer says the fair is also looking to the future.

“There are a lot of really great traveling exhibits out there that we would have trouble getting just because of the facilities. They want light control and climate control, more power,” he said.

The improvements planned so far are centered on the north end of the fair, an area that has seen steady changes over the last few decades which have reflected larger shifts in Minnesota’s economy.

Hammer said that when the State Fair moved to its current location in 1885, that section was dedicated almost entirely to agricultural tools, which is why part of it became known as “machinery hill.” However, as the state’s population shifted away from farms, and the agricultural machinery industry evolved from a dealership model to a manufacture-to-order model, the popularity of those exhibits began to decline, most notably in the 1970s and 80s.

“Ag economics changed and it didn’t make a lot of sense for the [farm machinery] manufacturers and dealers to have a large presence at the fair. We still have some, but nowhere near where it was,” Hammer said.

At the same time, Hammer says the fair is also being careful to preserve its roots. On Monday, the State Fair board announced that it was buying one of the fair’s oldest attractions, the Ye Old Mill water ride, from the descendants of the original designer. The mill is now in line for $500,000 in upgrades in this year’s budget.

One thing that’s not changing: The admission cost. Prices for the fair, which will runs from August 23 through Labor Day, will hold steady at $14 for adults (ages 13-64), $12 for kids (5-12) and seniors (65+) while children under 5 get in for free. “It's extremely important to us that the State Fair remain accessible to everybody, and low admission prices are a big part of that equation,” Hammer said.

Hammer believes that the two pronged approach the board has taken of preserving the familiar while showing off the “latest and the greatest,” has been key to the fair’s identity since it was founded more than 130 years ago.
“In that time there has been continuous change to stay current and relevant. At the same time, it's important to preserve things like the Old Mill because we can. We're not hanging on tightly to the past, nor are we neglecting it,” he said.