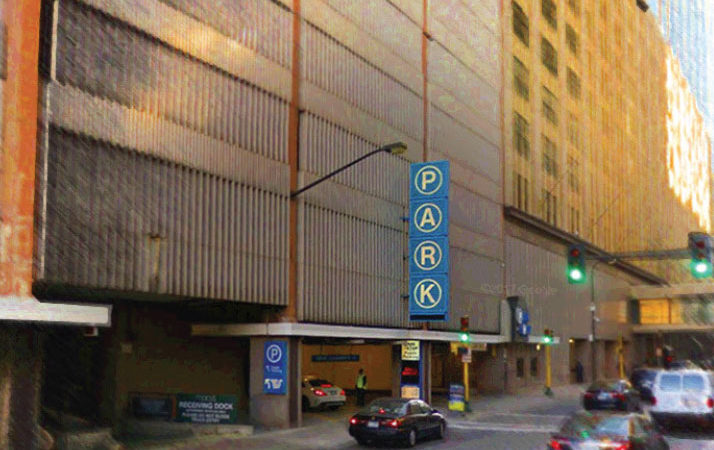 The only piece of downtown Minneapolis’s last department store still operating is its parking ramp. New York-based 601W Cos. paid $59 million for Macy’s in March, including some of the nine-story parking ramp, which seems poised to soldier on.

“The department store was a traffic generator. There has certainly been a decline in the volume of vehicles using the ramp,” says Jim Sanders, whose family, doing business as Columbus Corp., operates the ramp. He notes the ramp did not live and die with white sales and holiday shows: “When there’s an uptick in [office] vacancies, that has a real impact on us.”

Sanders’ grandfather Max pioneered the family business in the 1930s, operating a small parking garage on Seventh Street. In the 1950s, the Dayton family wanted parking and receiving docks. “The Dayton brothers negotiated this deal themselves,” says Sanders. The ramp was built in 1959. It includes three sub-basements for receiving and is now something of a period piece.

The ramp is owned by 601W, but the Sanders group owns a portion of the land under the building. 601W has a ground lease with Sanders’ group for its parcels. At the same time, Columbus leases the ramp from 601W and operates the ramp independently.

Sanders declines comment on the ramp’s revenue or his lease terms. He says that so far there have been no negotiations with 601W about future control of the site. Columbus also owns and operates the LaSalle Court parking ramp, across Eighth Street from the former Macy’s store.

Bloomington-based United Properties is a development partner and minority investor in the Macy’s redevelopment. Bill Katter, president and chief investment officer, says the ramp will ultimately be an important amenity for tenants of the building, but he does not expect it to be a cash cow. “We do expect it will provide some ongoing revenue,” says Katter. “But I don’t think it’s going to be significant.”

By one measure, the downtown parking business is improving. The city of Minneapolis had revenue of $65.7 million in 2016 for its 28,158 parking ramp spaces, surface lots and metered street parking. That marked an increase of 7.6 percent. Spokeswoman Sarah McKenzie cited a number of factors including fewer available surface parking lots. —Burl Gilyard