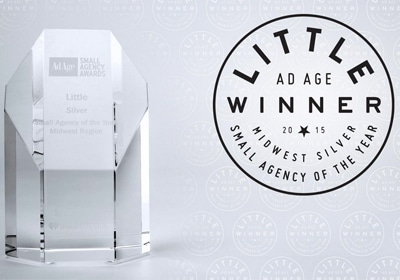 Little Honored With Small Agency Of The Year Award

Little is an apt title for an ad agency of only 30 creative minds. But the ideas emerging from its Minneapolis office—and its client list, including Target, Lowe’s and Wells Fargo—are quite the opposite. Still, the company was shocked when they were recently recognized in Advertising Age magazine’s Small Agency of the Year awards, taking home the silver prize for the Midwest region.

“This was a huge surprise and one of the highest honors in our industry,” Little’s President and Chief Creative Officer Joseph Cecere said in an email. “Historically, Ad Age selects more traditional advertising agencies for their honors, so to be honored for our work in strategic branding and design is an amazing testament to the impact that a solid brand has on our clients’ success.”

Advertising Age analyzes ad agencies from around the world in its annual Small Agency Awards, as the magazine delivers awards in the categories of size, region, office culture and campaign success. This is the first time Little has received this honor since opening its office in 1979.

Little has scored more than 15 new accounts in the past 18 months — six of those being Fortune 250 companies — which makes 2015 the best year the company has seen thus far. A particular standout of Little’s work has been the refreshed branding given to the Minnesota Timberwolves that rolled out in its 2014-2015 season, said Cecere.

Following the international award recognition, Cecere says Little is in the process of evaluating growth plans. As his agency and client list continues to grow, the company’s name might not be so apt anymore.