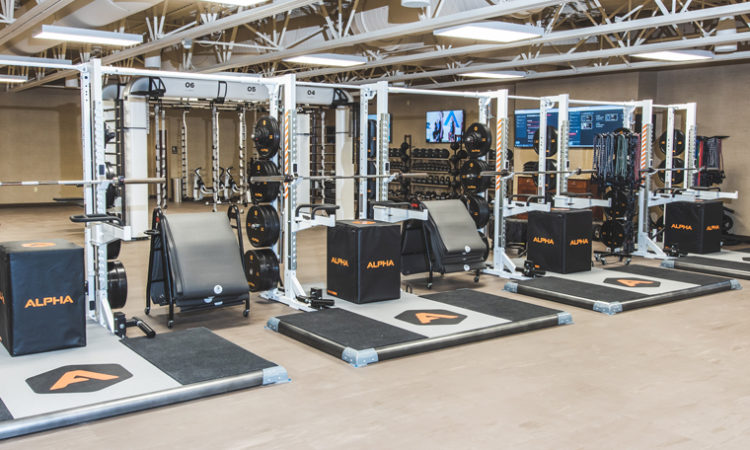 The project, involving a new basketball court, new studios and an enhanced LifeCafe, is the largest portion of $30 million total spent in 2018 on improvements to several different company facilities.
By Amanda Ostuni
November 12, 2018

The first facility designed to Life Time’s specifications, which opened in 1994 in Eagan, has lifted the curtain on a now-complete $7 million renovation. The changes, unveiled in a ceremony Thursday, not only update a facility that was blueprinted back in 1988, but also make up the largest share of a more than $30 million spending spree Life Time conducted in 2018 on company-wide projects in the Twin Cities.

“This is by far our most impressive project this year,” says Natalie Bushaw, Life Time’s senior director of public relations and internal communications. “We [were] excited to bring a new and elevated experience to our most passionate members who have made Life Time their home since before the club even opened.”

Bushaw says they have made updates to the Eagan space before—new equipment, carpet and other aesthetic changes—but this is the most substantial, complete renovation at the Eagan facility to date.

“Age, coupled with the overall growth and economic development in Eagan and the south metro led us to know the time was right,” she explains.

The $7 million investment resulted in: a new regulation-size basketball court for Ultimate Hoops leagues and other uses; four new high-tech group fitness, yoga and barre studios; a remodeled and expanded LifeCafe with an enhanced menu; a renovated pool, child center, physical therapy and chiropractic care area, and LifeSpa; as well as a new Alpha Studio – the company’s name for open rooms outfitted with Olympic platforms and equipment for squats, deadlifts and other classic workout moves. New programming and equipment were also added to the gym’s GTX Training area.

Bushaw says these updates were based on member experience feedback and analysis that identified seating shortages at LifeCafe, growth in popularity of small group training programs, a shift from strength-based equipment to other workout preferences, and changes in modern building architecture concepts, among other trends.

Initially opened as the company Lifetime Fitness, the Eagan location is now known as Life Time Athletic Eagan, and is part of what’s now a conglomerate operating under the Life Time identity. The business currently has 139 destinations and counting, including sites that serve additional or alternative functions to gym spaces – i.e. co-working, children’s soccer programs, and more.

“My vision in the 80s was to create a place that would positively impact people's lives. The idea… was to help people in their life, to give them time and to help with their fitness goals,” says Life Time founder Bahram Akradi in a statement. “Today… we bring healthy living, healthy aging and healthy entertainment together every day to wow our members and to help them live healthy, happy lives.”

The company’s growth is part of why Eagan got its facelift now, and why it’s just one piece of the $30 million spent this year – which Bushaw says is more than Life Time has spent on Twin Cities area projects in past years.

Beyond the Eagan gym upgrades, the $30 million helped create the children’s soccer program Life Time Sport with its first facility in the old Vikings Winter Park practice space in Eden Prairie, and the conversion of tennis courts to soccer fields at Life Time’s Lakeville site.

Capital has also been spent this year on building the first stand-alone swim school Life Time Swim in Maple Grove, while separate renovations were made to Life Time’s Woodbury, Minnetonka, Coon Rapids and Highland Park facilities.

Life Time will soon introduce its coworking concept Life Time Work to Minnesota. The first facility is slated to open January 2019 in St. Louis Park (which is also getting a new Alpha studio). Another is set to open alongside an entirely new Life Time Athletic space in the Southdale Mall in Edina in the fourth quarter of 2019. The third is slated to open in downtown Minneapolis, although its not yet known when it’ll open.

Outside the $30 million spent for customer spaces, Life Time has a $26 to $30 million corporate office expansion in the pipeline for next year. Bushaw says it’s been planned since the existing office was built in 2007, and it will accommodate current and soon-to-be added corporate staff.

Company-wide, the Life Time empire employs 35,000 team members across the U.S. and Canada, including 5,600 in Minnesota. More than two decades after starting in Eagan, it serves 39 major markets. The new and improved flagship site serves thousands of customers alone.

“It's the community that has made this place so special for so long,” says founding Life Time member Robyn Torell in prepared remarks. “We've gone through 20-plus years life experiences together and [the Life Time gym in Eagan] truly has become like home.”