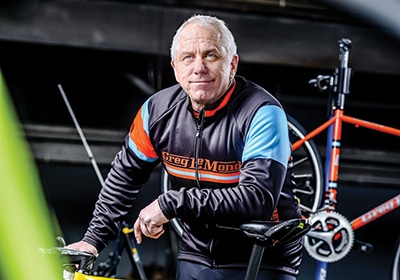 Tour de France winner Greg LeMond’s business venture, LeMond Companies LLC, has nearly reached the halfway point of a $10 million funding round, raising just over $4.8 million from nine investors, according to an SEC filing from Monday.

Nicolas Wegener, chief operating officer of the Minneapolis-based company, would not comment on how it would use the funds. However, the money could go toward the launch of LeMond Composites, a subsidiary focused on low-cost carbon fiber.

The new business is a natural progression for LeMond, who famously became the first man to win the Tour de France on a bike with a carbon fiber frame. In fact, he took home the 1986, 1989 and 1990 titles using a carbon-frame bike and, in 2013, began selling carbon-frame replicas of the winning bikes.

In the May 2015 issue of Twin Cities Business, LeMond spoke about his budding bicycle business and how he intended to re-launch his brand after being ostracized for challenging the legitimacy of Lance Armstrong’s seven consecutive Tour de France victories.

Now, with his latest venture, LeMond Composites, he is looking to revolutionize a decades-old industry.

Experts believe carbon fiber — a lighter, stronger and more corrosion-resistant alternative to materials like steel and aluminum — could become widely adopted in the automotive, construction and textile industries if one factor changed: its price. For years, industry types have said the “Holy Grail” of carbon fiber is at a $5-per-pound cost.

In addition, the company held an opening ceremony last October in West Oak Ridge, Tennessee where it is set to begin production of its low-cost carbon fiber in 2018, the Knoxville News Sentinel reported. The facility is expected to produce between 16 million to 20 million pounds of carbon fiber in its first year.

Once “Grail” hits the market, LeMond anticipated demand would skyrocket.