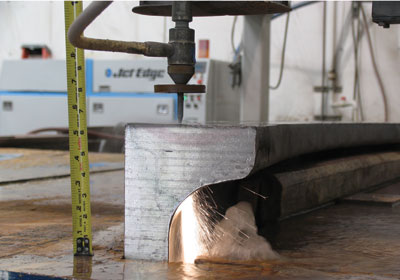 In the aftermath of the disastrous Deepwater Horizon explosion of 2010, as millions of gallons of oil leaked into the Gulf of Mexico, a St. Michael company called Jet Edge, Inc., played a key role in helping stop the spill nearly three months after it began.

BP had tried to lower a 40-foot steel containment chamber over the broken wellhead, hoping to funnel escaping oil to the surface. But an icy plug of gas and water—methane hydrate, which forms when natural gas hits cold water under pressure—foiled that attempt.

Technology made by Jet Edge eventually helped BP stop the spill. In an environment where a flame or spark from a blade could set off another explosion, water jets moving at the speed of sound were the perfect tool to cut through the clogged pipe and the ice that stopped it. With the plugged pipe removed, BP could cap the well, ending 86 days of oil gushing into the gulf.

The technology was first developed in 1984, when Jet Edge was part of Possis Corporation, and was originally used to cut diapers to shape. Water jets are still used to cut carpet, the fabric that lines car interiors, leather pattern pieces, and other softer materials. They can remove old paint from metal or clean barnacles from boat hulls.

The pre-cut melon cubes sold in many grocery stores are cut with water jets. It’s efficient, Lague says, and it’s sanitary. “A water jet doesn’t pass contaminants,” he says. “There’s so much pressure that no bacteria can live in the water.”

Water jets can even cut metal if combined with bits of industrial-quality garnet. Such abrasive water jets can cut aluminum, titanium, copper, bronze, and brass, Lague says. “We’ve cut thicknesses up to 10 inches,” he says, adding that the process compares favorably with a laser for accuracy.

After the first Gulf War, Jet Edge machines cut off Kuwaiti oil wellheads. But back then, in the early 1990s, water-jet technology wasn’t widely accepted. “We had to prove that this would work,” Lague says. “Twenty people would fly in and watch a demonstration. They’d say ‘Wow,’ but they still wouldn’t buy. Boeing, for instance, wasn’t about to use some new technology on their airplanes.”

Then the U.S. Navy switched from sandblasting to water jets to clean their ships, realizing that the technology was healthier for workers’ lungs. “They required their ship cleaners to switch technologies,” Lague says. First those cleaners outsourced work to water-jet shops, and then they bought water jets of their own.

The U.S. military became a direct customer this January, when the U.S. Army’s 11th Armored Cavalry bought a Jet Edge system to machine metal parts for broken vehicles, including tanks.

At Precision Waterjet Concepts in Pequot Lakes, owner Joe Quaal uses water jets to cut everything from bathroom tile to truck parts. He appreciates Jet Edge machines for their versatility and reliability. “Their machines have multiple cutting heads that can cut a circle in one go. That cuts the cost nearly in half,” Quaal says.

“It’s a wet, dirty, hot environment, and the Jet Edge products last better. A couple of our other machines have had a lot of breakdowns,” Quaal says. If a machine does break, Jet Edge can get replacement parts to him quickly, while some other manufacturers ask clients to wait while they ship parts from Germany, Quaal says.

The cutting process produces hot water, and five chilling machines extract heat from the pumps to heat the facility. “I don’t think I’ve paid a heating bill in a winter, and I probably heat 19,000 square feet,” Quaal says.

Jet Edge was acquired by Minneapolis-based TC/American Monorail in 1994, and moved to St. Michael, home of its parent company, in 1999. The company grosses about $20 million annually and employs 60 people. “We’ve been pretty flat the past three or four years,” Lague says, but the company may be poised for an upturn.

About 20 percent of Jet Edge’s business came from overseas last year, double the percentage in 2010, Lague says. Much of the new business comes from Poland and Russia, where customers typically buy abrasive water-jet systems for cutting metal. Jet Edge also has a sales and customer service manager in its small showroom in China.

Jet Edge also sees opportunity in the North American petroleum market. “Anything involving gas or oil means no blade or flame, so we look at the boom in oil here in the States as a potential market for our products,” Lague says. “I don’t think it’s unreasonable to ask my people for 15 percent growth annually.”