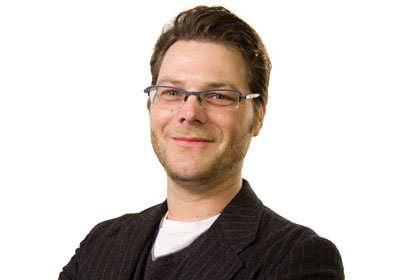 JÃ¶rg Pierach has overseen dozens of re-branding campaigns for clients, but his best work may have been, and continues to be, for his own interactive shop, Fast Horse. It’s an ongoing process.

“I used to think that a company in our industry needs to reinvent itself every five years, but now I think it’s more like every 18 months,” he says.

2005: An Open Letter to the Public Relations Industry

In 2001, Fast Horse Inc. was founded around one goal: to become one of the nation’s premier consumer marketing public relations agencies. Sadly, despite a growing staff of seasoned PR talent, a wheelbarrow full of prestigious PR industry awards and an enviable roster of clients, we’ve been forced to face reality: We no longer have any business calling ourselves a public relations agency.

Traditional mass marketing is dying. Technology has made it possible for consumers to dictate how they choose to engage with brands, and in this fragmented media environment, it’s all about relevance. Welcome to the world of YouTube, bloggers and Second Life. It’s here to stay. Many of our cousins in other marketing disciplines were quick to recognize this shift, and have successfully encroached on territory that has long been the core offering of public relations practitioners. Call it buzz. Call it word-of-mouth. Call it third-party endorsement. Call it experiential or non-traditional. Call it what you will, except, apparently, public relations, which has wrongly become synonymous with only one aspect of what we do best: media relations. Like you, we have felt powerless to change that perception.

So, it’s with mixed emotions that we must inform all of our friends in the industry that Fast Horse Inc. has ceased operating as a public relations agency.

Make no mistake, Fast Horse is here to stay. Henceforth, we are simply no longer categorizing ourselves as a public relations agency. Instead, we are choosing to plunge headlong into the broader marketplace of ideas unburdened by increasingly meaningless labels. Some will see this move as just semantics, but to us it’s more than that. As communications experts, we know the power of words. In this rapidly changing and increasingly muddy marketing services environment, we’ve found the public relations label constraining as we continue to seek new opportunities and talent. At Fast Horse, we create and sustain marketplace momentum for our clients by helping them engage consumers in their brands. It has always been our expertise, but we’ve come to realize what we do for our clients no longer fits into a neat little category.

We are proud of our heritage as a public relations agency, and remain dedicated to bringing our clients best-in-class media relations results as part of integrated consumer marketing campaigns. But as our clients continue to turn to us for creative, non-traditional marketing ideas, we are reserving the right to bring them the resources to execute around those ideas, whatever the discipline. The consumer marketing game is changing. For the better. And so are we. Call that what you will.

Let’s go back to the beginning. In April 2001, he left Weber Shandwick, the largest PR firm in the Midwest, to open his own boutique PR firm focused on consumer work. He had done his research, written his business plan, thought he had everything covered. He was all set to launch in October 2001. But before then two airplanes struck the World Trade Center.

“Whatever financial models I had created were out the window, as there was just no PR spending after that,” he says. He opened anyway but with little business. “That was a great lesson for me. You can spend all this time at your desk until the wee hours of the morning, and in the end you can’t anticipate everything.”

Since Pierach had some time on his hands, he went on a listening campaign. He visited other creative shops in town, including ad agencies, who responded to his ideas about consumer engagement. “For three or four years, they were the main source of business for us,” he says.

Things were rolling along, with Fast Horse achieving growth, when in 2005 another seismic social event occurred: the dawn of digital. What to do with that?

“People started wondering where social media fits in. Is it a PR discipline? Is it advertising? Is it interactive? I thought, ‘I don’t want to worry about what bucket it goes into; I just don’t want to be on the wrong side of it.’ My guess is it wasn’t going to land in PR,” he says.

And just like that, Fast Horse was no longer a PR firm. Pierach wrote a letter of reformation and nailed it to the industry’s door, Martin Luther style. [See sidebar.]

“PR is more than just media relations, and while the rest of the world may be slow to warm up to that, we’re not going to wait around for all that to sort out. We’re moving ahead as an integrated, nontraditional marketing firm,” he says.

The rebranding sent a signal to two audiences: clients and talent. “As a PR firm, we were going to have a hard time competing for the best digital people, the best design people—people with experience in paid advertising, who would have traditionally come from the ad field. By removing the label of ‘PR firm,’ we felt we were removing an obstacle to some of the more talented people out there,” he says.

Has Pierach’s gambit paid off? His company has doubled in revenue in the last three years, counts premium brands like Coca-Cola and Newcastle as clients, employs 23 people, and has anticipated revenues of $4.5 million for 2013.

“JÃ¶rg was shrewd in rebranding Fast Horse from being a PR firm to being a creative agency,” says Doug Spong, president of Carmichael Lynch Spong, the third-largest PR firm in town, based on reported revenue. “If you go to his website, he doesn’t even talk about PR anymore. JÃ¶rg’s a living, breathing example of how the industry has changed.”

Pierach is preparing for the next change. “We’ll be doing more visual storytelling. We hired a filmmaker and bulked on the design side. I think that’s what is next for us,” he says.

For Pierach, it’s all an opportunity for a higher level of intellectual engagement.

“We were in our narrow little box for a while, and there were very hard lines between advertising and PR and digital. And now those lines are blurred. I find that exhilarating,” he says.