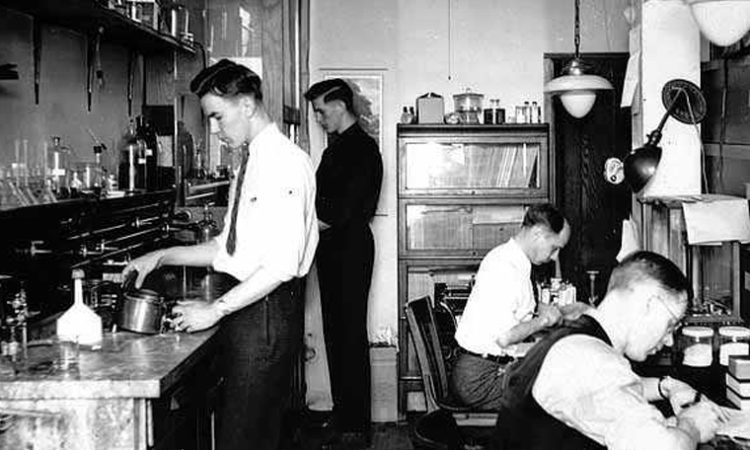 R&D employees of the Economics Laboratory at work on the sixth floor of the Globe Building in St. Paul, 1938. Pictured are John Effinger, Roy Frommer, Clarence Olson and John Lewis Wilson.

How St. Paul’s Ecolab Got Started from a Stain on the Carpet

Ecolab, Inc., is a public company that provides hygiene, water, and energy products and services. It was founded in 1923 as Economics Laboratory in St. Paul. By 2017, it employed 38,000 workers in over 170 countries, served customers in more than 1.3 million locations, and reported annual sales of $13 billion. It counted among its employees 1,600 scientists and held 6,300 patents.

Ecolab’s founder, Merritt J. Osborn, began his career as a salesman. In 1923, a stain in a hotel carpet convinced him of the need for a rug-cleaner that would not require removing the carpet.

Osborn set up an office in the basement of the Endicott Building in St. Paul. He then hired one-time St. Paul Winter Carnival princess Ida Koran as a secretary and assistant. He called his new company Economics Laboratory (EL).

Managed by the Osborn family, EL expanded its customer base to include restaurants, food processors, and dairies. During World War II, it developed one of the first detergents that killed germs and distributed it to U.S. forces to sterilize mess kits.

In addition to chemicals, from its earliest days the company also produced dispensers and equipment. In 1946, for instance, EL developed the first electronic dispensers for commercial dishwashers. Its comprehensive customer service included training and product maintenance in addition to equipment and products.

EL became a publicly traded company in 1957. It acquired Klenzade in 1961 and the Magnus Company in 1964. It then added petrochemical processing, metalworking, transportation, and laundering to its services. It also developed a cleaning system for car and bus fleets, a dairy cow sanitizer, and a rinse aid for dishwashers.

When EL’s first employee, Ida Koran, died in 1967, her will established a trust fund for EL employees in need. It was one of the first such employee assistance programs in Minnesota. Beginning in 1984, the trust also sponsored scholarships for the children of employees.

In 1978, the Osborn family gave up management of the company. In 1986, EL changed its name to Ecolab, Inc., and launched the Ecolab Foundation to seek out and fund charitable initiatives. Related projects involved water, education, the arts, conservation, and civic development.

During the 1980s, Ecolab sold off its pulp-and-paper division and several plants. It acquired pest control and extermination businesses and broadened its laundry offerings. The 1987 acquisition of ChemLawn, a lawn care service provider, proved unprofitable. Ecolab sold it for a loss in 1992.

The late 1980s and the 1990s witnessed Ecolab’s expansion around the world. It increased its presence in Latin America, Europe, Africa, the Asian Pacific, and the Middle East. In 1991, it entered into a joint venture with German firm Henkel KGaA that combined their European businesses. Ecolab also purchased Henkel’s Latin American and Asian Pacific businesses. The joint venture lasted until 2001, when Ecolab bought out Henkel’s 50-percent stake.

Acquisitions continued to extend Ecolab’s reach. The 1994 purchase of Kay Chemicals, a company in North Carolina, expanded its restaurant services. The 1996 acquisition of Indiana-based Huntington Laboratories, a producer of infection-control chemicals, added to its hospital and medical offerings.

Nalco Holding Company, Inc., a water and energy services company based in Illinois, became a wholly owned subsidiary of Ecolab in 2011. Ecolab acquired Champion Technologies, a Texas-based company focusing on petroleum and energy chemicals, in 2013.

Ecolab’s focus on water safety and sanitation attracted the attention of Microsoft founder Bill Gates. Through his investment vehicles, Gates was Ecolab’s largest shareholder in 2012, owning 10.8 percent of outstanding shares. That year, Ecolab amended its stockholder rights plan to allow Gates’ investment entities to acquire and own up to 25 percent of the company’s outstanding shares.

In 2015, Ecolab purchased the former Travelers Tower in downtown St. Paul for $47 million. The developer PAK Properties bought the former Ecolab headquarters, at 370 Wabasha Street, in 2017 for $3.6 million.

For more information on this topic, check out the original entry on MNopedia.