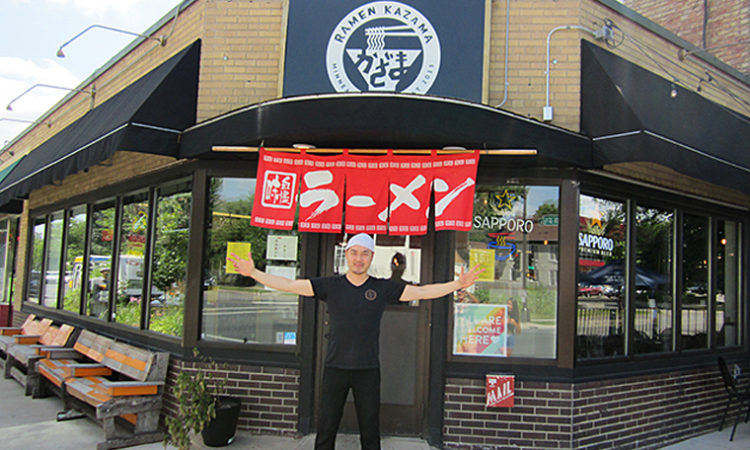 Matthew Kazama in front of Ramen Kazama, at the corner of 34th and S. Nicollet Avenue, in Minneapolis. (Photo courtesy of Jim Walsh/MinnPost)

Matthew Kazama’s journey to Ramen Kazama, at the corner of 34th and S. Nicollet Avenue, started in Hawaii, where he was born, and in Matsue, Japan.
By Jim Walsh
July 27, 2017

“You can’t do this without passion,” said the 38-year-old Kazama as his kitchen crew prepared for the evening rush inside. “I want to make a good, beautiful bowl of ramen and I want to be [a] good drummer. It’s kind of the same root. So when I was first making ramen and playing music, I thought, ‘Someday I would like my own place, and do something involved with music.’ That’s what I wanted to do, and that’s started happening now.”

Kazama’s journey to the corner of 34th and S. Nicollet Avenue – across the street, incidentally, from the oldest Burger King in the state – started in Hawaii, where he was born, and in his family's hometown of Matsue, Japan, which his family relocated back to when he was 2 years old. But his first love wasn’t cooking or music.

“When I was in Japan, I was hardcore baseball,” said Kazama, who grew up admiring Japanese baseball superstars Hideo Nomo and Ichiro Suzuki. “Japanese high school baseball is pretty big, and I was pretty good at it. I was a first baseman, switch-hitter. My whole thing was baseball. I wanted to be a major league baseball player. But Japanese baseball is really strict. Like, the coach could hit me, no problem, and kick me, no problem. It’s kind of crazy, and I’m not exaggerating.”

At the same time, Kazama was deeply into the ferocious sonic wailings of Guitar Wolf, whose namesake Seiji also hails from Matsue, and who proved to be both a musical and culinary influence on Kazama.

“When I was in Japan, my mom was all about organic food,” he said. “I’d be like, ‘Hey Mom, I want to go eat at that ramen shop, I heard it’s good.’ And she was like, ‘No, I don’t think you should go. You should eat this.’ So that got me thinking that ramen was so interesting because I never really had [permission to] try it. In my head I was, ‘I want ramen, I want ramen,’ just because I couldn’t have it. My mom was a good cook, but I was a teenager looking for something new. I was bored and we didn’t have money to eat out and Mom was always, ‘We have food to eat here.’

“So when I graduated high school I didn’t have to ask Mom anymore, and it was so good. And at the restaurant there were three pictures of three guys and I was, ‘Who’s this?’ And it was Guitar Wolf, and he loved his ramen, and he loved this ramen restaurant, too. He was a regular customer, and that made me think, it was always in the back of my head that Guitar Wolf liked this restaurant. He was a hometown hero, and I got to know them later.” 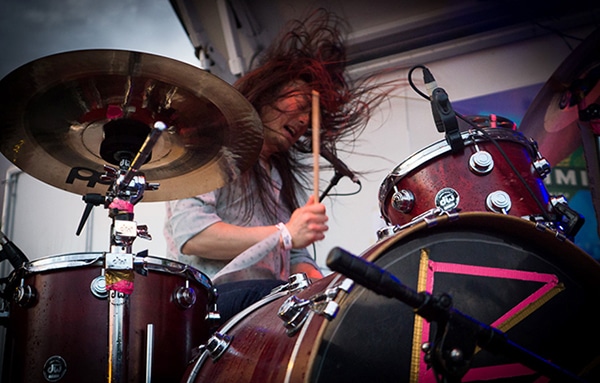 Matthew Kazama behind the drums. (Photo by Heather Romanowicz)

The dream of opening his own ramen shop stayed in his head as Kazama moved to Minnesota. He knew exactly one person here (“my grandpa’s brother’s daughter”), and, while he’d long wanted to move to the United States and take advantage of his U.S. citizenship, he wasn’t interested in returning to Hawaii, where a lot of his non-English speaking relatives lived.

“They lived there for 10 years and they didn’t speak much English, and I didn’t want to be like them,” he said. “So I came to Minnesota by myself. I was stupid enough to come all by myself.”

In April 1997 he landed in Minnesota, got a job washing dishes at the now-defunct Kabuki Sushi restaurant in Eden Prairie, and started working on his English.

“I started out as a dishwasher because I didn’t speak any English. None,” he said. “I started learning. Then, ‘OK, why don’t you try the kitchen.’ I started making tempura, miso soup and all that, then grilled chicken, then to the line cook, then to teppanyaki, you cook in front of people, I became that, then sushi [chef]. It was kind of a big restaurant, so everything was there. I was learning English and making sushi and it was just step up, step up, step up.”

Around the same time, Kazama joined Sweet J.A.P., the Minneapolis-based punk rock five-piece fronted by Hideo Takahashi, one of Minneapolis’ most engaging rock performers. But Sweet J.A.P.’s touring schedule conflicted with Kazama’s kitchen shifts at Kabuki, so he left for Fuji Ya in Uptown Minneapolis.

He also started cooking at the now-defunct downtown Minneapolis eatery Nick & Eddie’s, whose owner, Doug Anderson, encouraged Kazama to try his hand at the budding ramen trend of the day.

“I love Doug Anderson,” said Kazama. “Doug said, ‘I want to make ramen. I think ramen’s coming soon. Matthew, you’re working sushi. Can you make ramen?’ I was, ‘Ooh, I don’t think so.’ But then my friend, a member of Sweet J.A.P. said, ‘I think you can do it.’ I had a [little cook book] about ramen, this was before the internet, and I learned to cook the pork bone and all, and I started cooking it at Nick & Eddie’s in 2005 or 2006.

“I was still working at Fuji Ya, and Fuji Ya’s old owner was like, ‘Hey, guys, Tuesdays and Wednesdays there aren’t much sales, can you guys do something special?’ I said, ‘Can I do ramen on Wednesday?’ So I started doing it on Wednesdays, and I kept learning on my own, and little by little people through word of mouth were coming, and the next week more people, and more the next week. So suddenly, Wednesday was almost the busiest night at Fuji Ya, so I was like, ‘Wow. Maybe this is something I could do on my own.’ That was 2012.”

Around the same time, Sweet J.A.P. split up and Takahashi recruited Kazama for the Birthday Suits, a seriously incendiary noise-rock duo whose next gig is Aug. 23 at the 7th Street Entry.

“Matthew is the best drummer in town, it’s an easy choice,” said Takahashi. “We’ve been working together a long time and we understand each other musically, which is most important to me. We connect on music. He works hard. Like, I don’t really want to be a better guitar player, but he wants to be a better drummer and a better chef.”

“I’m still trying to figure out how to be a good drummer,” said Kazama, who also plays with singer Aby Wolfe in the thunderous synth-noise foursome Wild Wing.  “When I was in Japan, playing baseball, coming home I would hear [beats] and ‘That sounds so cool,’ but with baseball I didn’t have time. But I always wanted to be a drummer, just like I always wanted to do ramen, but I never had a chance.” 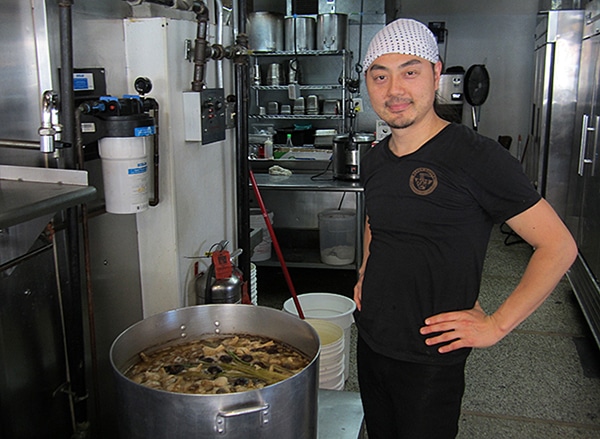 Matthew Kazama opened Ramen Kazama in November 2015, and by early 2016 there were lines of hungry ramen fans out the door every night. (Photo by Jim Walsh)

Backed by investor and fellow Fuji Ya alum Josh Floring, Kazama opened Ramen Kazama in November 2015, and by early 2016 there were lines of hungry ramen fans out the door every night. At the same time, Kazama’s wife, Katherine, gave birth to the couple’s first child, Charlie, and was starting a new job as a labor and delivery nurse at Abbott-Northwestern Hospital.

“We were in our 30s when we met, and I’d dated and things like that, and the main thing I love about Matthew is that nothing is dumb to him,” said Katherine. “He doesn’t think it’s cool to think things are dumb or lame, he just sees everything with fresh eyes and tries to make everything fun. He’s just a joyful person, and that makes him an awesome dad.”

“Everything was pouring on us at once,” said Matthew. “Familywise, we had a very difficult time, with so much stress — never had that kind of stress before, but we told each other, ‘When we can get through this we can get through anything.’ Just like, ‘Do this.’ So we’ve got that. Things are good. So far so good.”

Better than good, if the rave reviews for both his band and restaurant are any indication. One Ramen Kazama customer, in fact, proclaimed Kazama’s Summer Ramen to be “the best meal I’ve ever had.”

“People ask what’s the best thing on the menu, and I don’t know, I can’t even say,” laughed Kazama. “Everything is my baby, and I put everything into it.”