The Kruckeberg family is having maximum fun—and wants to maintain its maximum level of customer service.
April 01, 2020 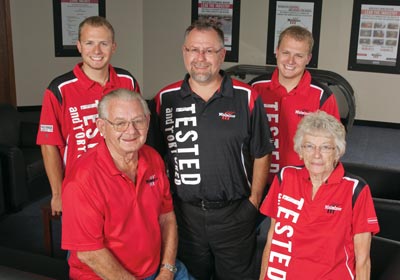 Craig Kruckeberg, owner and CEO of Minimizer, headquartered in the southern Minnesota city of Blooming Prairie, admits that he’s thought about selling the company he bought from his father, Dick, in 2006. It’s not as if he hasn’t had offers. But he has always hesitated before pursuing a deal.

For one, business has been very good. “We’re on a strong growth plan right now,” Kruckeberg says. “And we’re steadily adding to our portfolio of products.” According to Kruckeberg, Minimizer has averaged better than 17 percent annual revenue growth over the past five years, including 46 percent growth in 2010 and 37 percent growth in 2011. The company had 34 employees in 2009; as of mid-September this year, it had grown to 53. Minimizer sells its fenders nationwide and in Mexico and Canada; it now is looking at expanding into Europe.

The big driver for this transportation-oriented company—accounting for two-thirds of the company’s revenue in 2011—is high-density polyethylene fenders for semitrailer trucks that Minimizer claims are virtually maintenance-free. (Traditional metal fenders require regular polishing and painting, as well as occasional unbending.) Minimizer sells more than two dozen varieties of these fenders, and Kruckeberg says that more styles are on the way. He expects that the company will double this year’s output, which was 85,000 fenders, by 2015.

The company also sells toolboxes, lights, mudflaps, and other accessories for big trucks, and it just introduced fitted, hard-plastic floormats to its product line. “For drivers, trucks are their homes, sometimes literally,” says Steve Hansen, Minimizer’s national accounts manager. “These floormats protect floors from dirt, liquid, and wear and tear, and they’re easy to remove and clean. There’s nothing like them on the market.” According to Kruckeberg, Minimizer’s fenders are slowly gaining market share on the more common metal fenders, hitting around 35 percent in 2011. “But what’s really exciting is that the fender market keeps growing,” he says.

Dick Kruckeberg, who started the company when he was looking for a better fender for his own semitrailer truck, is “amazed” at how much Minimizer has grown, but is convinced that the market is just being tapped. “There’s so much potential,” he says. “We need to keep educating the industry about the good that fenders can do”—like keep debris from spreading onto a truck, which prevents damage and increases gas mileage. For Tyler Kruckeberg, Craig’s 22-year-old son and Minimizer’s shipping manager, the floormats are just the beginning of the company’s new product line. “There’s so much on a truck we can make better,” he says.

Tyler and his twin brother, Trevor, who is Minimizer’s special projects manager, represent another reason Craig Kruckeberg doesn’t want to sell the company. They are the next generation of leadership in the family business. “They’re dedicated to Minimizer,” Craig Kruckeberg says, adding that two daughters chose not to work for the company.

Asked why he wants the company to stay in the family, Tyler doesn’t refer to himself or his brother; instead, he says, “The customer service wouldn’t be as good, and that’s what really makes the company special.”

Craig Kruckeberg’s reflections on Minimizer’s products and customer service lead him to an unusual assessment of his company. “We’re really a marketing company that manufactures out of necessity,” he says. “We just can’t find anyone else to make products with our level of quality and customer service.”

And Minimizer hasn’t held back when it comes to marketing. He estimates that the company will spend more than $1.3 million on marketing in 2012. A glance at the Minimizer website—complete with high-quality videos—would suggest that the money is well-spent. That total doesn’t include the 53-foot exhibit trailer pulled by a new Peterbilt show truck, which Trevor Kruckeberg drives to the 17 trade shows Minimizer attends each year. “It will serve as a showroom, of course, but also as a place to meet with distributors and conduct training sessions,” Craig Kruckeberg says.

Minimizer’s distributors are another reason Craig Kruckeberg doesn’t want to sell his company. Because Minimizer doesn’t sell directly to customers, it depends upon its distributors, which makes Kruckeberg intensely loyal to them.

“We have over 800 distributors right now, and we ask everyone on our sales team to sign up one new distributor a month,” he says. “We provide face-to-face training for each distributor so that they sell ‘the Minimizer way,’ which means emphasizing product quality and excellent customer service. They not only sell our products, but they’re the ones who listen to the customers and encourage us to expand our product line.”

Craig, along with his parents and two sons, is also loyal to Blooming Prairie, which is home to all of Minimizer’s offices and manufacturing facilities. “We have a long-time family commitment to the area,” he says, noting that the company supports more than 15 local organizations and charitable events with 3 percent of Minimizer’s gross revenue. “Seventy-five percent of our employees live in Blooming Prairie, so we want to keep it a great place to live,” he adds.

Minimizer’s 53 employees are the last—and possibly the biggest—reason that Craig Kruckeberg keeps the company in family hands. “We know everybody’s name—that’s a family value,” he says. His father, who is at Minimizer’s offices most days during the summer months, agrees: “We understand that sometimes we are the only people our employees will trust,” Dick Kruckeberg says. “Our legacy should be one of caring for those who help us succeed as a company and a family.” He says that the company has fired one person and laid off no one in 27 years.

Craig Kruckeberg notes one more reason for keeping Minimizer in the family: “It’s exciting and fun.” Besides, he half-jokingly asks, “What else am I going to do for the next 20 years?”