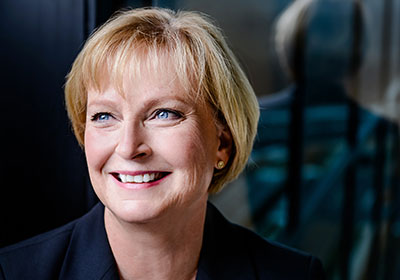 In January, Megan Remark became the new CEO and president of Regions Hospital in St. Paul, owned and operated by Bloomington-based health care provider and insurer HealthPartners. Remark is well qualified for the job. She joined HealthPartners in 1995 and for the past decade has led its Specialty Care Division, which includes cancer care and breast health centers, whose launch she directed.

Still, now that Remark is in charge of Regions, HealthPartners CEO Mary Brainerd wants to make sure she stays there.

HealthPartners’ top leader since 2002, Brainerd has been Remark’s coach and guide and is giving her a healthy start in running Regions by providing the connections she needs to succeed. Brainerd herself joined HealthPartners 10 years earlier, and helped guide the health system’s acquisition of Regions (then known as St. Paul-Ramsey Medical Center). While leading HealthPartners, Brainerd also has been involved in numerous organizations—in many cases, in a leadership position—addressing issues as complex and challenging as mental illness, income disparity and housing. These are issues, she argues, that matter to business as well as to the individuals affected.

George Halvorson, Brainerd’s predecessor as HealthPartners’ CEO and president, and until 2013 the chairman and CEO of California health insurer Kaiser Permanente, praises Brainerd as someone who is “very comfortable leading people collectively toward the solution of a problem.” HealthPartners is a complex organization, with “layers of interactions,” he notes. Brainerd “is not only comfortable with complexity, I think she enjoys it.” When Halvorson worked with Brainerd at HealthPartners, “my experience was that she was invigorated by the opportunity to do meaningful things.”

For Brainerd, that meaningfulness is part of the idea of what health really is. “We still often think of health as a dimension of one individual at a time,” she says. “What I’ve learned and see increasingly clearly is that health is a community attribute as well.” HealthPartners addresses community health in several ways—piloting new approaches in its clinics to screen kids for behavioral and developmental delays, for instance. It also partners with many public school systems to encourage students’ healthy eating.

“We’re permanent members of the community,” Brainerd says. “And we have a huge stake in the community’s success.”

Needless to say, Brainerd also has a huge stake in HealthPartners’ success. Megan Remark can attest to the role her mentor and boss has played in perpetuating that success.

First experience as a leader: “A summer job at the Minnesota Department of Health. A public health conference organizer in the department quit, and I got the chance at a pretty young age to be the coordinator. I learned pretty quickly how to organize and get people together.”

Hardest lesson: “Whatever you did last year, whatever you did yesterday doesn’t count for much for long. You have to continue to step up to the new challenges.”

Greatest current challenge: “Forging from [the combination of three businesses] a single culture. We engage the employees in a conversation about what our values are, what we are like when we’re at our best: lots of engaged communication, because that’s the only way you get alignment.”

Best mentor: “George Halvorson, who was my predecessor as CEO of HealthPartners. He taught me a lot, and I still frequently find myself thinking about advice he gave that is as relevant now as when we worked together.”

Best habit: “I work really hard to connect with people.”