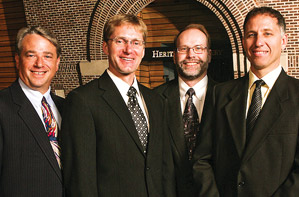 Being on dialysis is a dangerous game. If the underlying illness requiring dialysis doesn’t cause patients’ death, infection often will. Pursuit Vascular believes it has a breakthrough way to prevent these infections, which kill 22 percent of dialysis patients with catheters and cost more than $1 billion annually.

When people’s kidneys don’t function properly, they must receive dialysis three times a week to remove toxins from their blood. Hemedialysis patients typically have a permanent catheter in their chests to remove tainted blood and return the cleaned blood to their bodies.

But that catheter is a ripe breeding ground for infection, and dialysis patients contract an average of one-and-a-half bloodstream infections a year. Often they get better with antibiotics. But others require hospitalization, and some people die.

To prevent infection, Blaine-based Pursuit Vascular has invented a new disposable device called the ClearGuard Antimicrobial Catheter Lock. It’s essentially a rod filled with an antimicrobial agent that screws onto the catheter’s cap after dialysis, killing bacteria before they enter the bloodstream.

Pursuit Vascular CEO Robert Ziebol conceived the idea of inserting a device into patients’ catheters that remains until their next dialysis session. Calling on 22 years in product development, including 15 years for medical devices, Ziebol knew he was onto something promising. The company’s testing shows that ClearGuard will reduce infection by 75 percent.

“Not only will ClearGuard save lives, it saves health care dollars,” says Ziebol. “The net result is that it would save 17,000 lives a year and reduce health care costs by $700 million in the United States alone. I would like to see our device accepted as the standard of care in dialysis centers.”

Ziebol and his three partners started Pursuit Medical in 2008 as an incubator that would team with physicians to commercialize their medical device inventions. From it, Pursuit Vascular was born, and ClearGuard quickly gained favor. “As we started digging into its potential, it rose to the top so high that we’ve virtually put all of our resources into bringing it to forward,” Ziebol notes.

Starting as a self-funded entity, Pursuit Vascular spent 2008 developing ClearGuard, building prototypes, and testing them. Clinical trials will begin in the second quarter of 2010, and Ziebol expects to receive regulatory approval by mid-2012. Kicking off sales in Europe in 2011 and in the United States the next year, the company projects $2.5 million in revenue by 2012, $75 million the following year, and $200 million by 2014.

So far the toughest challenge has been securing financing. “We’re still a young company, so attracting attention has been difficult,” says Ziebol. “Investors are choosing to fund companies that have sales already and have already proven out their business.” Now that Pursuit Vascular can claim a Minnesota Cup win, Ziebol believes the company will have a more robust case.