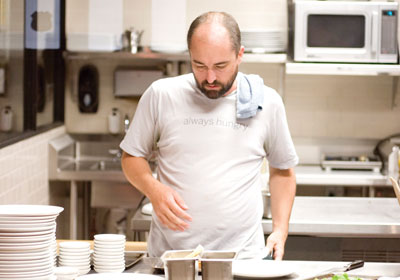 In 2007, Stewart and Heidi Woodman opened Heidi’s in south Minneapolis, and it was an instant hit. It offered four-star dining in a cozy neighborhood space and the town responded, as did critics. For years it was hard to get a prime table.

Today the tables are surplus. The place shuttered Oct. 23.

The food was never the problem. The $17 lobster pappardelle was celebrated, and the seven-course tasting menu for only $65 a consistent inspiration. But to bend a clichÃ©, if a masterpiece is plated in the forest (or in this case, Lyn-Lake) but no one is there to eat it, is it a masterpiece? In the restaurant game you need diners. And to please diners you need a great environment as well as great food. That wasn’t always the case at Heidi’s, according to observers, and the problem was perhaps one of personality.

“While I have never worked for Stewart, he has a reputation as being not easy to work for,” says Russell Klein, who with his wife runs Meritage in St. Paul, “This can hurt your business, because if your people aren’t happy they’re not going to work hard to make your customers happy. That’s a pretty big thing.”

It certainly would seem that his employees weren’t happy, as they’re now suing him for unpaid wages totaling $24,000. Woodman, who did not respond to a request for an interview, has given a statement that the restaurant’s assets have been seized and his hands are tied.

The closing also underlines the limited clientele for fine dining in the Twin Cities, and the emergence of several new competitors (Travail, Borough) which offer ambitious food in a more convivial atmosphere, which stretched the market’s limits.

“Consumers today are looking for more share plates and a more casual atmosphere, and that wasn’t how Heidi’s was perceived,” says Tanya Spaulding, a principal in design firm Shea, which consults with many restaurant owners. “Stewart is astute, so I’m sure he knew what people were ordering. Actually, if he were our client [and] wanted to reinvent the concept, closing and reopening isn’t a bad way to go.”