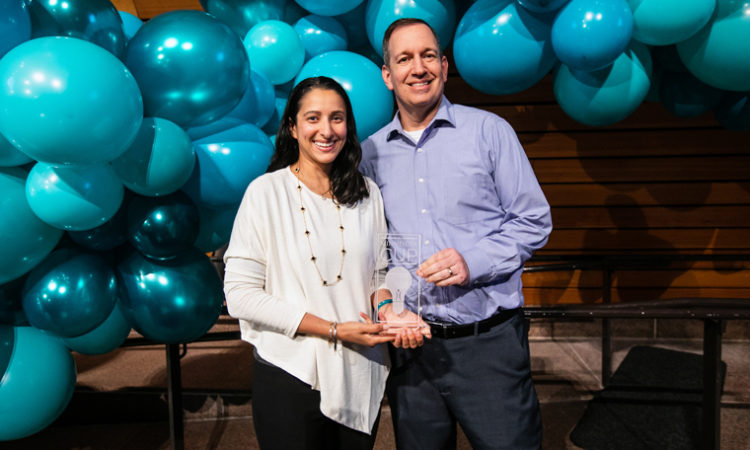 “I feel like I’m at the Oscars,” said Sen. Amy Klobuchar on Monday evening at the MN Cup awards celebration. In recent years, the MN Cup competition has become something akin to the Oscars for the local startup business community. Klobuchar made a brief appearance at the event held at the University of Minnesota’s McNamara Alumni Center, to present an award for innovation by a minority-led business. That businesses was Minneapolis-based HabitAware, which also won this year’s grand prize at the 14th annual MN Cup.

HabitAware makes Keen, a wearable smart bracelet, that helps people change habits such as hair pulling, skin picking and nail biting. The device emits a vibration when it detects movement associated with a specific habit, designed as a tool to help change behavior.

All told HabitAware brought home $100,000 in MN Cup awards: $50,000 for the grand prize, $30,000 as the High Tech division winner, and an additional $20,000 award for the minority entrepreneur with the most innovative business concept. The latter award was presented by the Metropolitan Economic Development Association (MEDA) and JP Morgan Chase – its third annual Innovative Minority-Led Business Prize as part of MN Cup.

HabitAware was founded and is led by the husband-and-wife team of Sameer Kumar, the company’s CEO, and Aneela Idnani Kumar, who leads design and marketing. The company has drawn national notice: In August HabitAware announced receiving a $300,000 research grant from the National Institute of Mental Health.

The company previously raised $510,000 from investors in a financing round wrapped up in early 2017.

Minneapolis-based Carrot Health, winner of the Life Science/Health IT division, was awarded overall runner-up honors with a $20,000 prize to add to the $30,000 it collected from winning its division. Carrot Health offers data-driven “health care business intelligence” for payers and providers.

During the event, leaders of 18 different startups – the winners and runners-up in all nine divisions – all made quick “elevator pitches” for their companies.

“This is always my favorite, favorite day of the year,” said Sri Zaheer, dean of the University’s Carlson School of Management, which organizes the competition.

Monday’s event marked the 14th annual awards celebration for MN Cup, which is now the largest statewide entrepreneurship competition in the U.S. MN Cup co-founder Scott Litman noted that the state now offers a more supportive environment for startups than it did when MN Cup began in 2005.

“One of the things we didn’t have 14 years ago was an ecosystem,” said Litman.