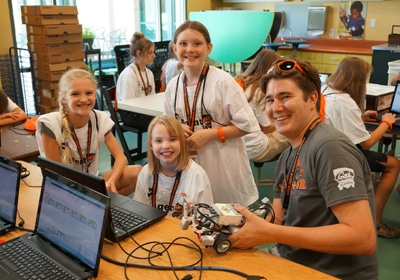 Students in 26 major cities across the country, including Minneapolis and St. Paul, take the role of “Junior Agents” and receive hands-on experience with some of the latest gadgets provided by volunteers of Geek Squad and local nonprofits.

Students can delve into artistic or scientific paths, with Geek Squad Academy offering a wide range of workshops, including digital music and film production, robotics, programming and 3D printing. Some courses this year will aim to demystify technologies like circuitry and digital citizenship.

The courses are meant to encourage growth in STEM (science, technology, engineering and mathematics) studies among the youth, and will continue through mid-September.

“This program offers young people the opportunities to learn about technology and all of the professional possibilities that come with it,” Susan Bass Roberts, head of community relations/diversity and inclusion at Best Buy, said in a statement. “Providing this kind of hands-on training in the right way enhances their desire to apply this knowledge to their future education and career choices.”

A survey of 2014 Geek Squad Academy participants revealed that 98 percent of participants said their level of tech knowledge improved as a result of the program. In that same survey, 64 percent felt “a lot more interested in technology” after attending the summer camp. An estimated 20,000-plus students have utilized Geek Squad Academy since its founding in 2007.