Olson employed its “brand anthropology” method—lots of time at the rink with players—to develop the campaign for Bauer’s new Vapor APX skates.
July 11, 2011 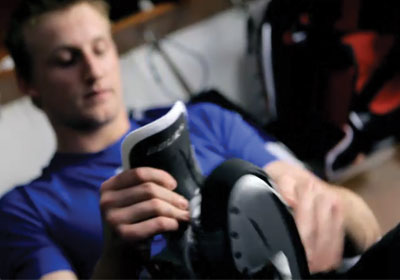 Every sport has its own tribal culture. And then there’s hockey. Most Minnesotans know this. Still, Minneapolis-based ad agency Olson employed its “brand anthropology” method—lots of time at the rink with players—to develop the campaign for Bauer’s new Vapor APX skates. In earlier work for Bauer, Olson even sent its anthropologists to Russia, Canada, and other hockey hot spots to live with high-school players. The message from rink rats? “If you don’t speak the language”—not the jargon, but the ethos—“you’re toast,” says Olson Creative Director Derek Bitter.

The Bauer Vapor X60 had already locked in many pro and amateur players. Olson needed to show that the Vapor APX model—with a one-piece molded boot that’s lighter and stiffer—justified the remake. At the same time, the agency applied “hockey truths” gleaned from its research: that hockey, more than most, is an “all-in” sport, requiring year-long dedication, cold commutes for early morning ice time, and considerable time in locker rooms donning layers of equipment. It all builds bonds between players and families. And “players have a very personal relationship with their skates,” Bitter says.

“Mirror,” a 60-second spot, is divided neatly down the middle. Bauer’s technology, design, and development work are the focus of the first 30 seconds. The other half goes to the human aspect of hockey, showing pro players prepping for game time. The NHLers attention to detail mirrors the methodical work of Bauer’s engineers. The combination pays off in the tagline “We advanced the skate. So you can change the game.”

A 60-second spot is a rarity these days and sounds luxurious, but it ran sparingly on television—just once during the National Hockey League playoffs on cable channel Versus, for instance. Instead, like most of the campaign, it ran on line, with heavy emphasis on social media sites. Olson expects word of mouth in hockey’s tight, tribal culture to “do most of the heavy lifting,” says Dennis Ryan, the agency’s new chief creative officer. It better: The budget for paid media, split equally between online, print, and TV, is less than $100,000—a small fraction of what Nike might spend to launch a new shoe, for instance.