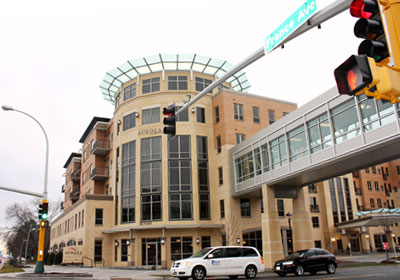 From the street, the brand new Aurora on France looks like another luxury apartment building. There are 192 units inside, but these are not market-rate apartments. Aurora, which opened on December 1, offers a mix of assisted living, memory-care and transitional-care units for seniors.

Patients who need some additional rehab time after a surgery, for example, can be wheeled directly to Aurora without having to set foot outside. Ebenezer, a subsidiary of Minneapolis-based Fairview Health Services, will operate Aurora. The new building includes 63 transitional-care units.

In Burnsville, for example, an Ebenezer facility is across the street from Fairview Ridges Hospital. But Aurora marks the first time that a Fairview hospital is directly connected to a continuum of care facility like Aurora, said Jon Lundberg, chief operating officer of Ebenezer.

Dr. Ken Kephart, medical director for Fairview Geriatric Services, Fairview Partners and Fairview Senior Services, says the connection makes sense because of an emerging trend for Medicare and other insurers to reimburse for an entire set of medical services, instead of covering every procedure or appointment individually.

New federal guidelines also put hospitals under increased pressure to reduce readmissions or face financial penalties. In some cases, having a patient in transitional care before being sent home can help reduce the risk of the patient being readmitted.

After the passage of the Affordable Care Act, Medicare was required to reduce payments to hospitals with “excess readmissions” of patients with certain conditions within 30 days of being discharged. The new policy went into effect in October 2012.

Aurora, located at 6500 France Avenue South in Edina, offers amenities including a cafÃ©, fitness center, a movie theater and other features. Aurora is also only a block away from the Southdale Center shopping mall.

Early response to the project has been encouraging said Lundberg: “We have about 30-plus reservations for the assisted living.”