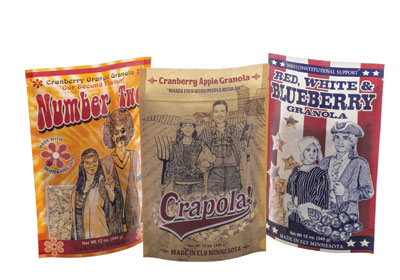 Crapola Granola: A Breakfast of Editors

Apparently, even business journalists just can't resist a product built on potty puns. How else to explain why Crapola granola, which has been on Twin Cities grocers’ shelves for years, managed to garner stories in the Star Tribune, MinnPost, and online food site Heavy Table, plus a flurry of product mentions, all within a couple of months?

Sure, the cranberry-apple granola is tasty and organic, and the founders, Brian and Andrea Strom, of Ely, have a low-key North Woods charm. The product that started as a joke in 2007 is now a real business: Sales topped $200,000 last year, allowing Andrea to quit her part-time job at a veterinary clinic and join the business full time. When we caught up with them this winter, the Stroms were seeking a larger facility for their Brainstorm Bakery than the remodeled house they’re in now. “We don’t want to turn into a giant factory,” Brian Strom said. “[We want to] keep what we’re doing, but scale it up, with maybe a little shop,” where someone could try a sample or buy a T-shirt. Recently, they’ve come out with two product extensions—Number Two (continuing the bathroom humor) and Red, White and Blueberry.

Still, it’s hard to imagine that Crapola would get as much press by another name.

“It is out of the box,” says naming expert Steve Manning, founder of the Bay Area agency Igor, who knows something about edgy names. “It does generate buzz.” But it’s also off-putting to some (Lunds and Byerly’s at first declined to carry it). “Out of the gate it gets attention, because it’s so crazy,” Manning says. “But I don’t think it has legs,” especially if the Stroms wanted to take Crapola national. “I have a juvenile sense of humor. I like a good poop joke,” he added. “But I’m not buying Number Two.”