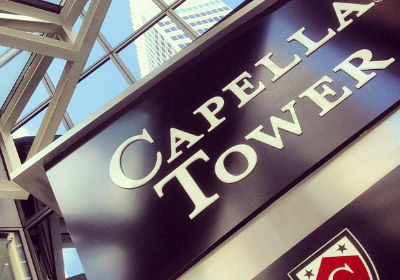 The online educator’s new enrollment fell 6.8 percent in its most recent quarter, and its revenue was down about 15 percent.
February 28, 2014

The Minneapolis-based online education provider announced that net earnings for the fourth quarter, which ended December 31, totaled $10 million, or $0.79 per share, up 16 percent from $8.6 million, or $0.68 per share, during the same period in 2012. Earnings per share were $0.03 higher than what analysts polled by Thomson Reuters had expected.

Capella University’s total enrollment fell 2.5 percent to 35,432, and its new enrollment decreased by 6.8 percent from the same time last year.

“We continued to make steady progress in 2013, delivering annual new enrollment growth and operating earnings improvements in a challenging market environment,” Chairman and CEO Kevin Gilligan said in a statement. “We are confident that our strategic focus on learner success, innovation, and relationship-based marketing is positioning Capella for long-term, sustainable growth.”

“Performance trends stabilized in 2013,” Steve Polacek, senior vice president and chief financial officer, said in a statement. “While the timing of our return to total enrollment growth has likely shifted to the latter part of 2014, we believe moderate annual new enrollment growth and operating margin improvements are achievable in 2014.”

Shares of Capella’s stock were trading down about 7.7 percent at $61.22 per share Tuesday afternoon.