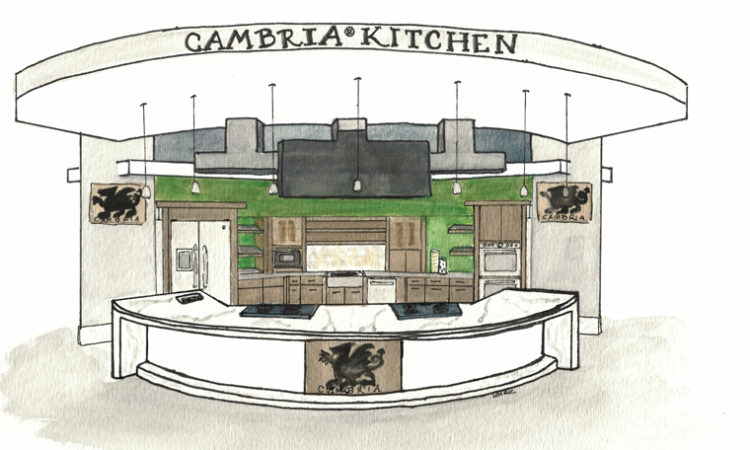 Rendering of the Cambria Kitchen, coming this year to the State Fair. (Illustration by Laurie Mendenhall)

Cambria, the Le Sueur-based maker of natural stone surfaces, is unveiling something new at the Minnesota State Fair this year. Through a collaborative effort with regional brands Modern Design, SKD Architects and Millennium Media Systems among others, Cambria will be opening “Cambria Kitchen,” a state-of-the-art food preparation space dedicated to hosting live cooking demonstrations.

Its debut will be marked by performances from rising local chefs, as well as renowned figures Andrew Zimmern and HGTV celebrity Scott McGillivray, who will make appearances on August 24, the second day of the fair.

The Cambria Kitchen is the result of a renovation that involved a complete gutting of the prior inhabitant of the space, the Creative Activities kitchen.

“Remodeling the kitchen has been a long-term goal and we are happy to have such a beautiful frame for demonstrators, cooks and restaurants to promote local businesses and to cultivate interest in creating delicious and attractive food,” said Mark Goodrich, the fair’s deputy general manager, in a statement.

Modern Design provided the Millwork for the project, while SKD Architecture provided the design, Millennium Media Systems the AV and technology, Roth Living the appliances, Filament Lighting and Home the pendant lighting, and Kohler the space’s plumbing fixtures.

“As a Minnesota-based, family-owned business that’s deeply rooted in this community, we were compelled to bring together like-minded, regional brands in our industry to create an inspirational and highly innovative kitchen,” said Summer Kath, executive vice president of business development for Cambria. “It has been such a fun and fulfilling project to spearhead and we hope fair visitors will enjoy the highly experiential and educational shows lead by our local favorites.”

The kitchen will have scheduled action throughout the 12 days of the fair. Zimmern will appear Friday, August 24 from noon to 1 p.m., making his signature cold sesame peanut noodles and crispy shrimp toast rolls. At other points that same day, McGillivray, a Cambria brand ambassador, will make multiple appearances himself.

Other first-time fair offerings this year besides the Cambria Kitchen include: seven new rides; a mental health awareness sector at Dan Patch Park featuring games, trivia, exercises and other elements; a 6,600-square-foot open-air pavilion as part of the Pet Pavilions and Outdoor Demonstration Area with furry friend-themed programming; an expanded draft horse and miniature horse competition schedule; and The Hangar, a new area designated for food, craft beer and entertainment.