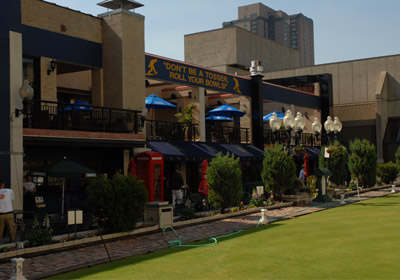 Brit’s Sells The Most Draft Newcastle In The World (Again)

A Minneapolis pub is gearing up—once again—to celebrate the fact that it sold more Newcastle Brown Ale on draft than any other bar in the world.

Shane Higgins,
general manager of Brit’s Pub in downtown Minneapolis, told Twin Cities Business that Brit’s earned the title for the second consecutive year, having sold the most draft Newcastle in 2012 and 2013.

When a local distributor informed Brit’s that the Minneapolis bar was the biggest Newcastle seller in the state, Brit’s asked him to circle back with Newcastle and see how well the pub fared on the national stage. After Newcastle consulted its database and confirmed that Brit’s sold the most Newcastle in the country, the pub asked the company to extend the scope internationally, and “low and behold,” it turned out the bar sold more draft Newcastle than anyone in the world, says Higgins.

Now, Brit’s has learned that it earned the title for the second year in a row. Higgins estimates that the pub sold roughly 27,000 Newcastle pints in 2013, translating to roughly $140,000 in revenue. He acknowledged that in the United Kingdom, where Newcastle is produced, the beer is widely popular in bottles, although many British pubs also sell it on draft.

Brit’s, located on Nicollet Mall, is throwing a party, free to the public, on March 7 to celebrate. Beginning at 4 p.m., Newcastle pints will be available for $2, and the first 400 guests will receive a free commemorative T-shirt. Trivia starts at 6 p.m., followed by a performance by a Queen tribute band at 8 p.m.

Higgins said it’s tough to quantify the impact that earning the Newcastle title has had on Brit’s, but it generates a lot of conversation at the bar; for example, he’s overheard patrons express pride in having ordered a Newcastle on draft, at the world’s biggest seller of the product.

Nearby Irish pub The Local has in the past earned similar accolades, having sold the most Jameson Irish whiskey in the world. (The pub’s former owner, Kieran Folliard, however, would later launch his own whiskey brand, 2 Gingers, and sue Jameson over the marketing of a cocktail.)

The Twin Cities are home to a growing craft beer scene, one that often emphasizes local products over macro-brews. Even Brit’s, which, as its name implies, has a British theme, serves beers produced locally by Fulton Beer, Summit Brewing, and Surly Brewing. But it appears many Minnesotans continue to opt for European imports, at least when imbibing at Brit’s.