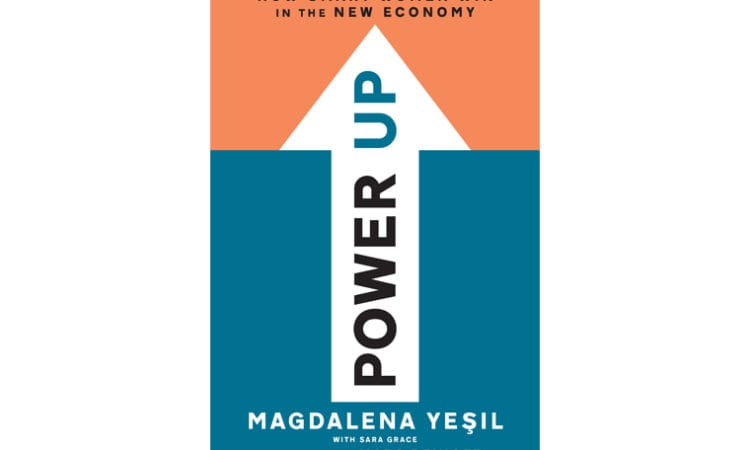 Book Review: “Power UP: How Smart Women Win in the New Economy”

Be ready to survive disaster, both personal and in business. Groom a good support network and be a mentor. Lean toward other women, but don’t make a “gender divide.” And finally, never run away from a job.
By Terri Schlichenmeyer
October 31, 2017

For many years, that’s the number of women there were in your department at work. One (you), or maybe a few more, but not many. You survived it, for sure, but times have absolutely changed since then – and in the new book “Power UP” by Magdalena YeÅil, they’re still changing, even now.

For generations, women in business have been told how difficult it is to break through a “glass ceiling” at work. Having grown up in Turkey, YeÅil knew a little about that but she wasn’t fully prepared for what faced her in the traditionally male-dominated American world of tech engineering. To survive, she had to learn American culture, English-as-a-fourth-language, and to allow herself to “make big bets and lose several.”

One of the wins was something she learned: success is very possible for women in business, but you can’t wait around for it.

As an immigrant, she says being “humbitious” (humility + ambition) was part of her make-up, but it’s particularly something women should cultivate; one “keeps you grounded,” while the other “propels you forward…” Also, remember that whether you own a business – something that’s not for everyone, and that’s okay – or you work for someone else, you are “the Boss of your career.”

To move ahead, and as hard as these things are, ask for feedback and act on the negative. Know when it’s time to be assertive. Learn to “brush off provocations,” even when #metoo has thrown you for a curve by knowing that “you have more power than you think,” and that cultivating gravitas – “a combination of your dignity and seriousness” – will make all the difference. Don’t put up with comments on your attire; wear what makes you feel powerful and will fit in within the business-culture. Document and report harassment. And, she says with humor, if you’re faced with innuendo, “throw cold water” on it by asking for clarification on its meaning.

Be ready to survive disaster, both personal and in business. Groom a good support network and be a mentor. Lean toward other women, but don’t make a “gender divide.” And finally, never run away from a job. Run toward something. It will leave you with “head held high.”

There are an awful lot of personal stories inside “Power UP.”  In fact, the abundance makes it seem as though that’s all you’re going to get – but no.

When author Magdalena YeÅil begins sharing tales of being the lone woman in a team of men, the tone of this book shifts from cheerleading to empowerment. When she offers advice, it’s from the POV of someone who’s dug a foxhole in a career in a mostly-male business. And when she begins sharing tales of how she dealt with harassment, this book immediately jumps to the headlines.

For that, it should be next on your to-read shelf. Its advice and commentary is on-point, its stories are relatable, and its firm-gentle tone is not at all off-putting. If you need a business book that’s timely and helpful, “Power UP” is the one.