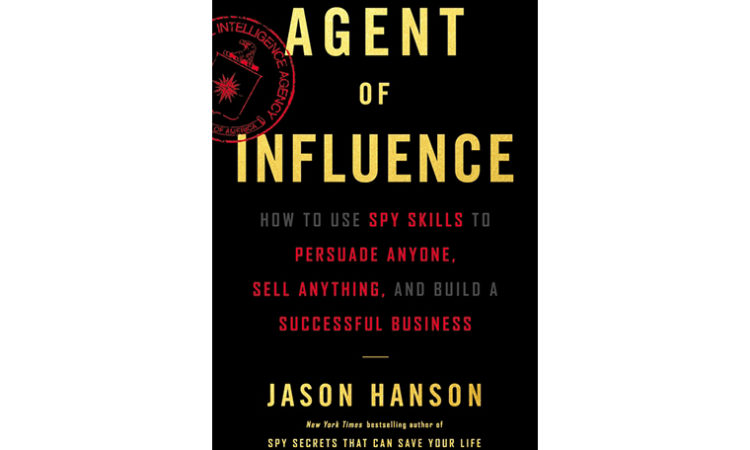 Book Review: ‘Agent of Influence: How to Use Spy Skills to Persuade Anyone, Sell Anything, and Build a Successful Business’

Author Jason Hanson thinks that business and espionage have a lot in common.
By Terri Schlichenmeyer
June 20, 2019

“Agent of Influence: How to Use Spy Skills to Persuade Anyone, Sell Anything, and Build a Successful Business” by Jason Hanson

You just had your trench coat to the cleaners.

There are new batteries in your undercover wrist-camera, and your listening device seems to be working well. You’ve even found a perfect hidey-place to watch from the shadows. Yep, this seeking-and-capturing-new-customers stuff is hard but that’s what it takes to get ahead, right? Although, wouldn’t it be easier to read “Agent of Influence” by former CIA agent Jason Hanson?

So you think you’ve got it bad in business.

That could be true, says Hanson, but work won’t generally kill you, as it might for an undercover intelligence officer. He should know: he spent seven years working for the CIA before starting his own business as a personal safety expert. That was when he noted that business and espionage have a lot in common.

Perhaps one of the most important commonalities is what Hanson calls “The Confidence Reflex,” or the ability to be flexible, practice empathy, maintain physical and mental stamina, control emotions, and eye an outcome. The Confidence Reflex proves that you are “100 percent capable of accomplishing any goal you set.”

For spy and businessperson alike, it could take months or even years to see success in an endeavor, and Hanson says that learning to use “The SADR Cycle” is essential. Spotting, Assessing, Developing, and Recruiting is “the world’s most effective sales technique,” and it works at every stage of the process. Part of the SADR Cycle is learning to home in on body language, to read a room, and to know when to cut an employee, a colleague, or a customer loose.

Also important in the SADR Cycle: patience, and lots of it.

Learn “the Art of Elicitation,” Hanson says, and know how to do an “hourglass chat.” Always maintain sincerity. Know your target’s learning style, in order to gain his attention. And strive to try something new at least once a month. This helps you to remember that you don’t know everything…

Readers who are feeling a little puckish might be disappointed that there is no skulking involved in “Agent of Influence,” and no talking to your shoe. Instead, what you’ll find in this book is serious stuff, told with a no-nonsense tone.

And yet, this is not a self-help book; author Jason Hanson says that his aim is not to “add another to the hefty pile” of such tomes. Instead, he draws analogies between the world of intelligence and that of business, linking espionage to entertainment and science to selling. Readers, therefore, shouldn’t be surprised to see that his methods will take real work – many of them demand that you learn totally new ways of living and moving about in the world – and “patience” is a word that surfaces often. To keep you involved, in the meantime, Hanson offers real-life stories of espionage, covert meetings, and danger of the deadly sort.

So, yes, you’ll learn a lot by reading “Agent of Influence,” but it’s also darn fun to read, too. Entertainment, instruction, a better business – this book’s got it covered.

Learn the easiest Rubik’s Cube solution with the beginners method. You have to memorize only 7 steps to fix a scrambled cube.