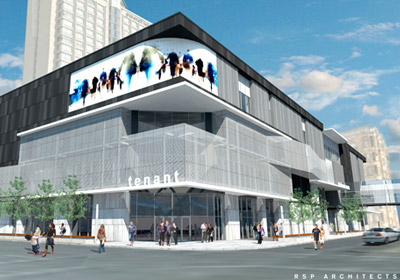 Block E To Be “Completely” Renovated

The facility's owners hope that a new Timberwolves and Lynx training facility will bring “cachet” to the long-troubled property.
December 05, 2013

The owners of Block E in downtown Minneapolis have announced plans to “completely” renovate the largely empty retail and entertainment complex.

Plymouth-based Provident Real Estate Ventures, the asset manager for Block E owner Camelot, LLC, announced Monday that it signed a letter of intent with the Minnesota Timberwolves and Lynx to “create a world-class training facility” to anchor a recast Block E.

Block E, located at 600 Hennepin Avenue in downtown Minneapolis, is just across the street from the Target Center, where the Timberwolves and Lynx play. The Minneapolis City Council recently approved a $97 million renovation plan for the 23-year-old, city-owned Target Center.

But even with the addition of the practice facility, there will still be space to fill in the Block E complex. The renovated complex will offer about 120,000 square feet of office and restaurant space to be leased.

“I think the Timberwolves bring a great cachet and energy to the building,” said Phillip Jaffe, a partner with Provident Real Estate Ventures, who touted the property’s location as a draw to potential tenants.

Current tenants Kieran’s Irish Pub, Starbucks, Jimmy John’s, and The Shout House, a dueling piano bar, will remain open. Minneapolis-based RSP Architects has been tapped to design the renovation. Jaffe said that the goal is to have the renovation completed in late 2014.

Block E opened in 2002, aided by $39.1 million in tax increment financing from the city of Minneapolis. Camelot, LLC paid $14 million for Block E in July 2010, a fire-sale price for the 213,000-square-foot complex. The property also includes 550 underground parking stalls.

From early on, Block E proved to be a challenging environment for retailers. Former tenants of Block E include the Hard Rock CafÃ©, GameWorks, Bellanotte, Hooters, and Borders, which once operated a two-level bookstore at the downtown location. The 15-screen AMC Block E movie theater closed in September 2012 following a legal dispute over the terms of AMC's lease. This summer, the Hennepin Theatre Trust solicited Minnesota-made art to temporarily fill vacant storefronts at the long-troubled complex.

Block E is on the same block as the Graves 601 Hotel, but the hotel is under separate ownership.

On Monday, City of Minneapolis spokesman Matt Lindstrom said that the current outstanding balance of tax increment financing debt on the property is about $13.2 million. In its announcement about renovation plans, Camelot, LLC, indicated that it was on schedule to pay off the tax increment debt by 2019, seven years ahead of schedule.

The owners are not seeking any public financing or subsidies for the redevelopment of the Block E property.

“This is a significant development for Block E, for Hennepin Avenue, and for our upcoming Target Center renovation. I’m very pleased that this deal, when approved, is one more anchor for our great partners, the Timberwolves and Lynx,” Minneapolis Mayor R.T. Rybak said in a statement provided to Twin Cities Business.

Something else that might change? Jaffe told Twin Cities Business that he’d ultimately like to lose the long-standing “Block E” name.

“I think it’s safe to say that, long-term, we will rename and rebrand it once we get further along,” Jaffe said.