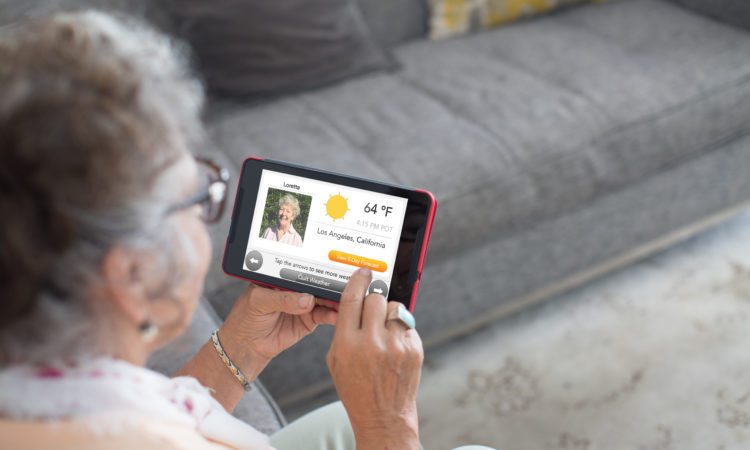 The GrandPad is designed for maximum ease of use for older adults. Courtesy of GrandPad

A Tablet for the Older Generation

GrandPad aims to eliminate the digital divide faced by the older generation with its senior-friendly device.
By Tina Nguyen
March 29, 2022

Amid today’s highly saturated market for cellular devices and communication apps, it’s easy to feel overwhelmed, especially for the 75-plus crowd. That’s part of the reason that Hopkins-based entrepreneur Scott Lien decided to launch a new tablet designed with the older adults set in mind.

Lien co-founded the GrandPad with his son eight years ago after seeing his mother having trouble with modern tech. But this isn’t a tablet that simply mimics other popular hand-held devices like the iPad; instead, it’s a completely built-from-scratch device purposely designed for seniors, Lien says. From its wireless charging dock to its interface and even its packaging, the tablet caters to the needs of older individuals.

“When I get to be 80, I’m going to have one or more of the following: eyesight issues, hearing issues, dexterity issues, arthritis, maybe cognitive issues, dementia, and so on,” says Lien. “And all of those things make standard technology not just frustrating, but in most cases impossible to use.”

That’s where the sophistication of simplicity comes in, says Lien. Rather than tacking on more cumbersome features, the GrandPad focuses on refining its most basic elements, such as video calling and photo sharing.

Now, Lien says that the GrandPad has been used to connect more than 1.3 million people, including family, friends, and caregivers, in more than 120 countries with a rapid expansion into the health care space. Currently, 60 percent of its operations are in the business-to-business enterprise healthcare space, a transition from its direct-to-consumer approach.

“We see seniors really struggling with how they’re able to digitally interact with their doctor, so we want GrandPad to really pave the path and make that easy to have great health care available to seniors,” said Lien.

The GrandPad is an eight-inch tablet with a linear scrollable interface with large, simplistic icons for its apps.

It comes equipped with a wireless docking station to immediately begin charging upon contact, a stylus pen, 4G LTE, and insurance and customer support where GrandPad users can contact a representative for 24/7 troubleshooting.

To test all of these features to make sure they are truly senior-friendly, GrandPad hired Grand Advisors, a group of seniors who range from 75 to over 100-years-old to help design and guide product development.

Currently, GrandPad either runs at a prepayment of $65 per month or an annual payment of $780, which includes its tablet, cellular data, software, and customer support. Customers who opt not to commit to a full year will pay $89 a month.

GrandPad also recently launched on Amazon to connect with the current consumer market. Lien says GrandPad’s most popular customer is 40- to 60-year-olds who are buying the tablet for their older parents.

“Our mission is to improve the quality of life for this age group and live in a world where no seniors are lonely, disconnected, and isolated,” says Lien. “So many seniors are isolated because of the digital divide that’s been created by standard technology. With this, we think we can really close that gap and put seniors back at the center of the family and really allow them to live a great life.”