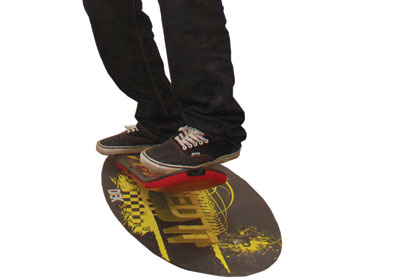 A Kid’s Eye for Invention

The Dek optimizes Your Wii, Kinect, and other gaming systems.
February 11, 2011

If you’ve played skateboarding, snowboarding, or fitness games on a carpeted floor using your Wii or Kinect, then you know what inspired six-year-old Jacob Carlson to invent the Dek stabilizing platform. His prototype was a piece of stiff plastic that he slipped under his skateboard controller. It gave him better balance and improved connectivity between the sensors on his board and the game system so play wasn’t disrupted.

Jacob’s parents and a couple of their friends formed Woodbury-based Dek, LLC, a few months ago to produce and market higher-style versions of Jacob’s invention (though he still has final design approval, according to his dad). They also signed up pro snowboarder Pat Milbery as a celebrity spokesperson. Milbery’s other sponsorship gigs include Red Bull and Skullcandy.

The Dek is available only at getdek.com as of early January, but cofounder Tim Beres says the company is looking for a distribution partner that can help put it into major retail channels.