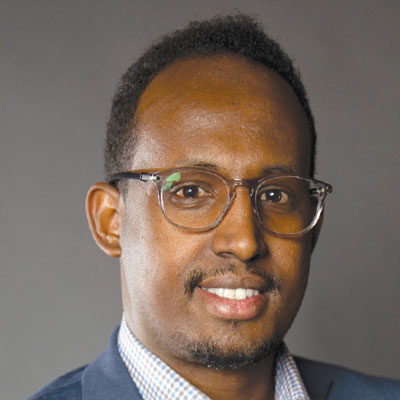 2021, Alumni: Sahan means “pioneer” in Somali. The St. Paul-based news nonprofit led by Mukhtar Ibrahim has been drawing national notice for its coverage of immigrant and refugee communities. In October it was selected for Facebook Journalism Project’s Sustainability Accelerator Program, a sign of bigger things to come.

2020, Emerging: Do we really need one more media outlet? Mukhtar Ibrahim argues absolutely yes. Sahan Journal is an online news outlet focused squarely on covering the immigrant and refugee communities in Minnesota. Ibrahim, a native of Somalia, immigrated to Minnesota in 2005. Armed with journalism degrees from the U of M and Columbia University, he worked as a reporter for the Star Tribune and Minnesota Public Radio. But he saw a gap in media coverage of immigrant and refugee perspectives and issues. Sahan launched in 2013 and relaunched in August, with backing from MPR; a month later it had already landed a $25,000 grant from the Facebook Journalism Project.