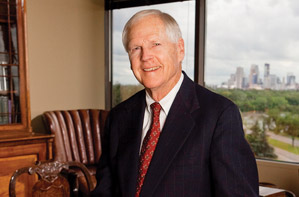 The Mortenson name casts a long shadow in the Twin Cities business community. In 1960 “Mort” Mortenson Jr. joined the company founded by his father in 1954, and became president in 1969. By the 1980s, under the junior Mortenson’s stewardship, the company had grown into one of the largest construction and engineering firms in the Midwest, ranking No. 201 on Forbes’ most recent list of America’s largest private companies, home to 2,500 employees and with estimated 2012 revenue of $2.4 billion. Mortenson is general contractor for the new Vikings stadium, a $1 billion undertaking that ranks as the largest project in the company’s 60-year history.