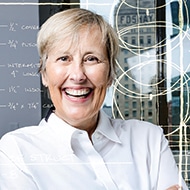 Julie Snow had never designed a baseball stadium, but CHS Field in downtown St. Paul has drawn rave reviews for its impressive design. That’s no surprise to anyone who’s followed Snow’s distinctively modernist work since she founded Julie Snow Architects in 1995. Other notable projects include the new office space for the Mithun advertising agency, Target Plaza Commons and the Brunsfield North Loop apartments (all in downtown Minneapolis). Snow won the 2014 AIA Minnesota Gold Medal from the state’s chapter of the American Institute of Architects for work that “consistently exemplified the excellence in Minnesota design.”