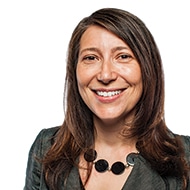 JoAnna Hicks knows urban real estate. Prior to joining Minneapolis-based Ackerberg in 2010, Hicks worked with Minneapolis-based Neighborhood Development Center and later Ryan Cos. In her current role, Hicks leads the investment team for Ackerberg. Front-burner projects include refining the retail mix at Calhoun Square, which Ackerberg acquired in 2014, and pitching MoZaic East, a planned sequel to the firm’s successful Uptown office project.