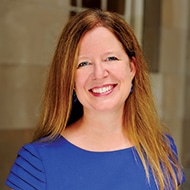 For theater-watchers locally and nationally, the selection of Jennifer Bielstein to complete the Guthrie’s management team was the final indication that the region’s flagship theater is in extraordinarily good hands going forward. Bielstein cut her teeth in the Chicago theater scene, and for nine years managed the prestigious Actors Theatre of Louisville, which runs the annual Humana Festival of New American Plays. She is widely regarded as one of the stars in the field right now, and the hope is that her strong administrative leadership will give executive director Joseph Haj greater freedom to focus on artistic development.