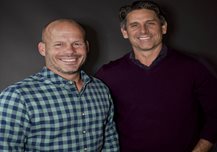 Dave Mortensen and Chuck Runyon were convinced that getting people to work out would work out. Has it ever—Anytime Fitness has been the world’s fastest-growing fitness chain in each of the past seven years (with revenues up 31 percent to $634 million in 2013), thanks to a paradigm-shattering formula of convenience (24/7 access to “neighborhood clubs”), affordability (low-frills facilities and staffing) and a non-intimidating environment. After just 12 years, Runyon and Mortensen have muscled their way to more than 2,600 units (virtually all are franchises) in all 50 states and 20 countries on five continents in their quest for global domination.