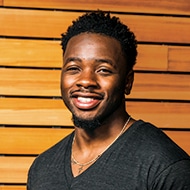 Damola Ogundipe—the 26-year-old co-founder and CEO of St. Paul-based start-up Civic Eagle—first attracted attention as a Minnesota Golden Gopher football player who also scored a degree from the Carlson School. Now the Nigerian native is doing it again as one of the very few CEOs of color in the nation’s technology sector. He’s working to capitalize a mobile app and technology platform that combines civic engagement with social media, meant to raise political participation among traditionally hard-to-reach groups such as youth and minorities. Civic Eagle was also a 2015 MN Cup winner.