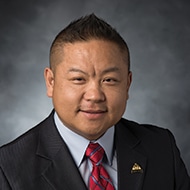 In 2013, Dai Thao was the first Hmong person to be elected to St. Paul’s City Council. He represents Ward 1, which includes the Thomas-Dale and Summit-University neighborhoods. In 2017, Thao will see results from council actions that he supported in 2016, including building a Major League Soccer stadium in St. Paul. He expects adjacent development that broadens the city’s tax base. A father of three, Thao advocated for a mandatory paid sick-leave policy in the city. The new ordinance takes effect on July 1, 2017, and most St. Paul employers are subject to it.