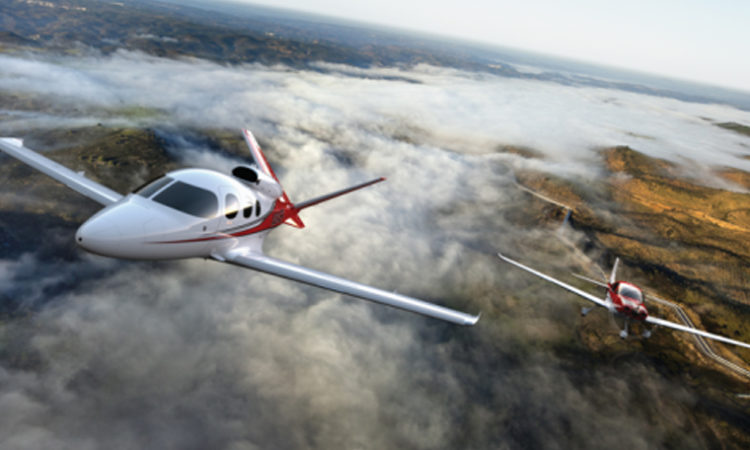 The Cirrus Vision Jet (left) and one of the company's SR model planes.

The personal aircraft maker is hoping to tap new markets for its innovative jet.
May 22, 2017

The single-engine personal jet, which hit the market last year as the first and only of its kind in the world, recently earned approval from the European Aviation Safety Agency (EASA).

Duluth-based Cirrus announced the news on Monday alongside another milestone: the delivery of the first Vision Jet to Europe.

This week, the company’s personal jet will be on display at the European Business Aviation Convention and Exhibition in Geneva, Switzerland. The EASA approval, as well as a separate EASA approval in March for the use of single-engine commercial IFR (or instrument flight rules) operations, could open the doors to an untapped market for Cirrus.

“The EASA approval of the Vision Jet Type Certificate paves the way for a ramp up of aircraft deliveries in Europe and continues to propel Cirrus Aircraft into new markets across the world,” Pat Waddick, president of innovation and operations at Cirrus, said in a statement.

Before the rulings, single-engine turbine planes were not allowed to fly at night or with Instrument Meteorological Conditions, a flight category that requires pilots to fly with instruments (or IFR) as their foremost reference instead of outside visual references, a separate category known as visual flight rules (VFR). Cirrus’s Vision Jet, as an innovative entry to the aviation field, required separate approval for use.

So far, the company has accumulated more than 600 orders for the jet. Cirrus is hoping that number will swell as new orders come in from Europe, along with Australia, which also recently gave the OK to the Vision Jet. It received FAA approval for last October.

Each Vision Jet is assembled and painted in Duluth. The starting price is $2 million.

Dale Klapmeir and his brother Alan founded Cirrus in 1984 with safety as a key motive to their early aircraft builds. A signature component of each Cirrus plane is the Cirrus Airframe Parachute System—a rocket-deployed, 65-foot parachute that can control the rate of descent and prevent severe crash landings. The device is said to have saved at least 142 lives.

For the advances Cirrus has made in the aviation field, TCB inducted Dale Klapmeier into its Hall of Fame in 2015.