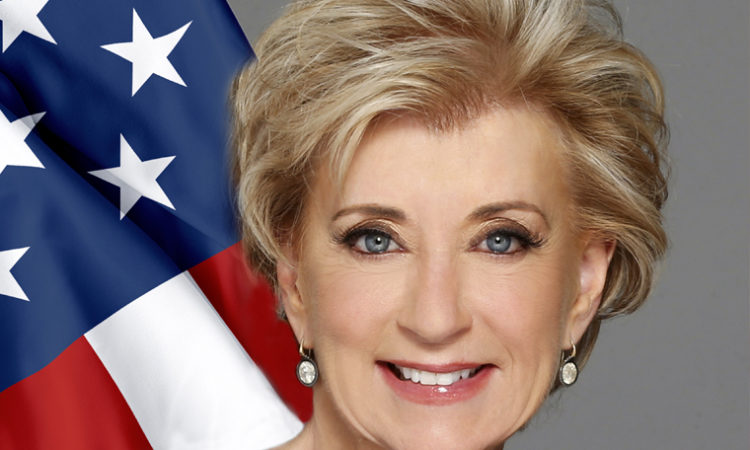 Linda McMahon, who leads the U.S. Small Business Administration on President Donald Trump’s cabinet, was in the Twin Cities on Tuesday to meet with local small business owners. McMahon’s itinerary also included delivering a speech at the National Women’s Business Conference, which is being held this week in Minneapolis. The conference is presented by the Washington D.C.-based National Association of Women Business Owners (NAWBO).

McMahon’s visit was part of her effort to visit all 68 SBA district offices across the U.S. So far, she has visited about one-third of those offices.

“Part of the reason I’m on this tour is to make sure that SBA is not the best-kept secret in the country,” McMahon told Twin Cities Business on Tuesday morning. “We’re not just about making loans. We’re about mentoring and networking.”

McMahon started her tour of local businesses shortly after 8 a.m. at the Hen House Eatery in downtown Minneapolis.

Co-owners Barb Gardiner, Maribel Cuadros Perrault and Tara Koenig opened the restaurant in 2014. Hen House Eatery currently has 65 part-time and fulltime employees. The partners launched their business with the help of an SBA loan.

“We wouldn’t be here without it,” said Koenig.

McMahon was also slated to visit Minneapolis-based Wood from the Hood, which makes products out of recycled wood, and the Element Gym in St. Paul.

One big issue for employers across the nation and in Minnesota remains finding enough qualified candidates to fill job openings. The U.S. Department of Labor reported a national unemployment rate of 4.2 percent for September, considered to effectively be “full employment” by many economists.

“I hear more and more often that our small businesses all over the country are saying they need a skilled workforce – or a workforce: people who want to come to work,” said McMahon.

Trump has proposed trimming the SBA’s budget by five percent for 2018, but Congress has yet to vote on the federal budget. McMahon says that the proposal calls for modest cuts to duplicative programs.

“We’re going to be able to absorb those cuts,” said McMahon.

The U.S. Senate confirmed McMahon as the Administrator of the SBA in February. McMahon’s business experience includes co-founding World Wrestling Entertainment Inc. (WWE) with her husband Vince. Linda McMahon was CEO of the company from 1997 to 2009.

Based on her own business experience, what advice would McMahon offer new entrepreneurs?

“The first thing I tell them is make sure that you do something that you love and you are passionate about. Because if you’re an entrepreneur and you start your own business, it’s a 24/7 commitment. You’re going to have to work it, there’s going to be sweat equity, you have to be able to recognize opportunity. One big thing that business startups often fail at is having enough capital. They’re undercapitalized when they go in; they don’t understand the cash flow management,” said McMahon. “That’s one of the things that SBA through our resource partners…[is] so helpful at is helping to structure that business plan and understanding the management of cash flow. I think that kind of advice is as important, if not more important, than actually the access to capital.”