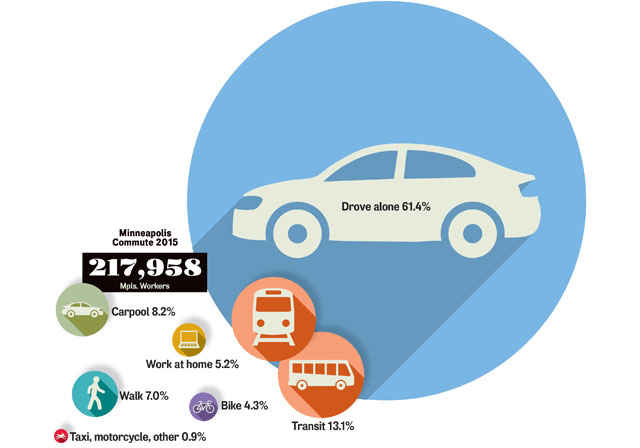 Workers are slowly realizing there are options other than driving alone.
February 01, 2017

With bike lanes, apartment buildings and LRT lines sprouting all over Minneapolis, how are people getting to work? As you probably suspected, more are using two wheels.

Of the approximately 218,000 workers in the city about 5 percent work from home, and 7 percent are fortunate enough to be able to walk to work, according to 2015 Census Bureau data. That leaves roughly 190,000 folks battling a commute.

Of that group, the one mode that is growing is biking. It has almost doubled in popularity since 2005. Nearly 5 percent regularly navigate traffic on two wheels, according to Census data, although the number rises and falls with the weather. Move Minneapolis, an organization that promotes sustainable transportation, estimates 7,000 bike commuters gut it out and ride year-round. The city’s Climate Action Plan hopes to triple that number by 2020 with the addition of 30 miles of on-street protected bikeways.

The Census Bureau reports the average commute time for the Twin Cities, factoring in all modes, is a paltry 23 minutes, up two minutes in the past 10 years—but laughable by Seattle or Chicago standards.

While the solo ride to work citywide remains the clear preference, mass transit is particularly popular for those who work in downtown Minneapolis, with about 40 percent using some form of transit to get to work, according to the Downtown Council. Still, the council has lofty goals, aiming to increase transit use by the workforce to 60 percent by 2025.