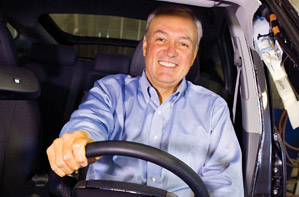 ABRA Auto Body & Glass started repairing cars more than 25 years ago at its first location, in Fridley. Under Benjamin’s leadership, the company has grown from that single shop to 100 locations in 11 states.

What It Does: Operates and franchises collision repair and windshield replacement centers in 11 states.

But before it got any larger, Benjamin believed ABRA would have to become more efficient. In 2007, the company started a strategic planning process to reset its goals and strategies. That planning process, supported by new enterprise management software, has helped cut the average repair time by about two-thirds while improving customer service measurements. This effort has ABRA poised for growth just as the economy starts to improve.

“We really worked hard the last several years,” Benjamin says. “We actually slowed down our growth to become a more efficient operator.”

Benjamin’s career in the auto industry started in the mid-1970s, after he retired from active military duty and moved to Minnesota with his wife. He grew up and went to college in Rhode Island, where he earned an industrial management degree while playing defensive end on a football scholarship.

Benjamin cofounded a Nissan dealership in Fridley in 1976 and eventually bought out his business partner with a loan from his father-in-law, which he repaid a few years later. He saw a business opportunity in opening a collision center. In 1984, he and a partner opened the first ABRA shop. (“ABRA” originally stood for Auto Body Refinishers of America.) Over the next decade, Benjamin bought out his partner and sold his dealership to focus on growing ABRA.

The original plan was to establish a successful chain of repair shops in the Twin Cities, but the vision expanded when a pair of struggling collision shops in Memphis inquired about franchising and became the company’s first footprint outside of Minnesota.

The business scaled from there largely because Benjamin and his team were able to earn trust and referrals from insurance companies. ABRA has sought to make insurers’ lives easier by submitting digital photos and other documentation electronically, reducing the number of site visits and delays. It recently created a “self-management” program for insurers that allows them to outsource many of their auditing and oversight functions to ABRA.

That is just one of the innovations ABRA has introduced since 2007, when Benjamin decided the company needed to intensify its focus on “operational excellence, which is really about being the most efficient, lowest-cost producer of your service,” he says.

Over several months, the company redesigned its operations manual to resemble a football playbook, which it supports with training videos. ABRA also scrapped its curbside estimate program, which was often inaccurate because of the frequency of hidden damage. Instead, the company has set up a thorough review and repair plan for each vehicle. For each project, technicians make sure they have all the parts on hand before starting work. The company’s new IT system lets its shops better track their work flow, helping them to identify bottlenecks and transfer work to other locations if necessary.

“It isn’t technicians working faster. It’s the streamlining and efficiency of the admin process,” Benjamin says. “It’s like anything. If you get a good, solid plan, when you start executing it goes better and more quickly. You slow down to speed up.”

The recession certainly affected ABRA’s industry, but the company managed to win market share and maintain same-store sales throughout it all. Benjamin credits the company’s efficiency strides for that success. “We’re in a position to acquire or build locations,” he says, “and do it more quickly, more efficiently, and with more success.”