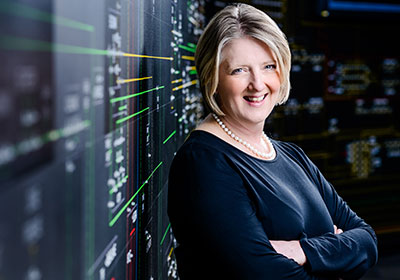 1985 Senior rate analyst at the Minnesota Department of Public Service

2007 Managing director of government and regulatory affairs at Xcel Energy

2009 CEO and president of NSP-Minnesota

Judy Poferl has a lot on her plate, to put it mildly. Named senior vice president and corporate secretary of Minneapolis-based utility Xcel Energy in 2013, Poferl was given an additional assignment in December: chief of staff to Xcel Energy chairman, CEO and president Ben Fowke.

In her current roles, Poferl oversees corporate communications, business planning and the Xcel Energy Foundation. As corporate secretary, she serves the company’s board of directors and shareholders. But even with her workload, Poferl always finds time to mentor others and serve the community.

Christopher Clark is one who has benefited from Poferl’s help. At the beginning of 2015, Clark succeeded Poferl as president of NSP-Minnesota, one of Xcel’s operating divisions. “Judy helped me learn to deal with a large, complex organization,” Clark says. “She knows how to take what we need to do and make sure we’re presenting it as completely and clearly as we can.”

Having worked in the energy field either on the government or the business side for 30 years, Poferl is experienced in managing the kind of complexity that Clark is talking about. As a regulated utility, Xcel is a business that, in Poferl’s words, “is literally embedded in the communities we serve.” In many cases, that requires working and communicating with numerous stakeholders who often have different goals.

Helping execute Xcel’s voluntary metropolitan emission reduction project was one such initiative for Poferl. This project—which lasted eight years, concluding in 2009—involved replacing two Twin Cities power plants fired with coal with natural gas and upgrading a third with pollution control systems. “It was one of the first things we did that brought together the environmental community, the business community, customers, us and policymakers,” Poferl says.

Poferl encourages employees to participate in the community outside of work hours, and she serves on a lengthy list of boards. Poferl sees her work and community service as part of a seamless whole. In fact, she isn’t a fan of the notion of “work/life balance.”

“You certainly want balance in your life, and some moments might look out of balance,” she says. “But over time, are you accomplishing your priorities and achieving what you want to achieve?”

First experience as a leader: “Walking into a staff meeting that had a number of men in it, and I was probably the youngest person in the room. I felt like, ‘Oh, boy. Am I ready for this? They are all more experienced than me.’ I was fresh out of grad school and in the leader role for the first time on a project. I learned to never underestimate the value of your own contribution.”

Hardest lesson: “‘Doubt has killed more dreams than failure ever will.’ The lesson has been to learn how to replace doubt—which can hold you back—with trust.”

Best mentor: “I keep myself open to learning from a wide variety of people and build my own set of skills and ideas for navigating challenging situations.”

Best habit: “I try to carve some time every day to quiet my mind and just breathe. And that is really helpful for me.”

Worst habit: “I can be a little disorganized in my physical surroundings.”