Jones Metal Products stresses risk and entrepreneurship—among not only family members but also their employees.
April 01, 2020 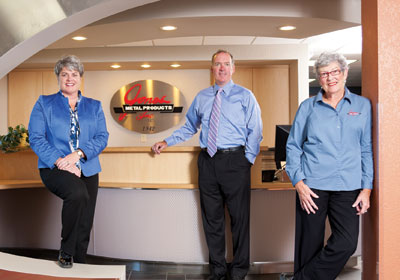 Though Jones Metal Products was founded in 1942, you could say that in some respects, the Mankato-based metal fabrication firm didn’t come into its own as a family business until 11 years ago.

In 2000, Marcia Jones Richards, the daughter of company cofounder Mildred Jones, took co-ownership of Jones Metal along with her husband, Tom. For many years beforehand, family members had been much less active for many years in running the company, and it hadn’t been managed by a family member, though several had served on its board. At that time, only one family member—David Richards, now Jones Metal’s purchasing manager—was actually working for the company.

That’s changed. Marcia became actively involved in the management of the company as chairman of the board in 2004, after the death of her husband, Tom, who had overseen the management of Jones Metal Products as board chair. In 2008, their daughter Sarah joined the company as manager of training, recruiting, and safety. She is currently the company’s director of sales and marketing and will soon become the company’s president and CEO, taking over from Steve Jones (who’s not a family member, curiously enough) as early as next year. Jessica Richards-Palmquist, Marcia’s oldest daughter, serves on the company’s board and is director of the Page Jones Richards Family Foundation. In September, Jones Metal Products became wholly owned by the third generation of the family.

Rather than a top-down model, the company asks its employees to participate in problem-solving exercises, encouraging them to come up with solutions to production challenges in order to improve product quality and manufacturing-line efficiencies.

Marcia Jones Richards sees this approach as something that’s woven in the company’s DNA. “My dad was always making drawings, thinking about how to [make] the proverbial better mousetrap,” she says.

The company that Cecil and Mildred Jones started began as a producer and installer of roofing products and a supplier of sheet metal, the latter primarily to local machine-engineering firms.

The company currently provides products, fabrication, engineering, and design services primarily to the power generation and agricultural and heavy construction industries; it also performs some military contract work. Most of Jones Metal’s business remains in the Midwest, though it does have customers in Europe and Asia. One of its most important customers is Caterpillar’s paving equipment division.

In talking about their company, the Richards family often circle back to the words “risk” and “entrepreneurship.”

“We’ve got to stick our neck out sometimes and try things that nobody’s thought of in terms of producing a product,” Sarah Richards says. “We have a very talented group of employees that are willing to do that . . . . It’s not exactly risking your life. But it’s taking a risk, taking a chance on a design or a new way to create a new product, a new process, a new machine.”

“When they can take a flat piece of metal and create these bends and welds and make something that’s very intricate in shape . . .  it’s amazing to me,” Marcia Richards says.

While that kind of innovation and “entrepreneurship” from Jones Metal’s craftspeople is what the family particularly prizes, the company also focuses on what it terms “key performance indicators”—safety improvements, on-time delivery, energy efficiency, eliminating rework, and keeping scrap to a minimum, recycling and reusing scrap whenever possible.

This focus on continuous manufacturing improvement has made Jones Metal a valued partner for its customers. Doug Rohlk, materials manager with Kato Engineering, a Mankato-based division of electrical engineering and manufacturing giant Emerson, has had a long and durable relationship with Jones Metal, which supplies components for Kato’s electrical power generators. In fact, Kato is Jones Metal’s largest customer.

“They have a great liaison with our engineering department,” Rohlk says. They build the components exactly to my specifications. And they understand those specifications and what we’re asking. We couldn’t do it without them.”

Rohlk and other customers almost had to do it without Jones Metal. In the mid-2000s, the family contemplated selling the business. Instead, after much soul searching, the Richards saw the value of the company and its innovative people, and recommitted themselves to its future growth. The family members now conduct monthly conference calls, quarterly meetings, and an annual company meeting.

Jones Metal Products is involved in numerous Mankato-area civic and charitable causes, notably improving educational outcomes at all levels (elementary, secondary, university). Most of its financial contributions are made through the Page Jones Richards Family Foundation.

Choosing to hang on and build upon the family business is “a risk,” David Richard says. “In the era we’re in now, technology . . .  is advancing so fast that, if you don’t keep up with it, you’re going to fall behind. And so, you’re constantly out there searching for the best technology that fits you, and then searching for the way that’s going to pay for it.” But those are the kinds of risks David and his family are more than willing to take.