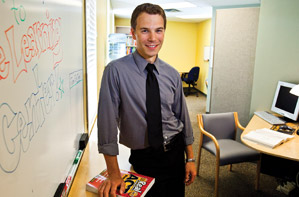 After his freshman year at the University of St. Thomas, Joe Keeley took a summer job caring for the children of two local physicians. When his employers’ friends asked him if he knew of anyone who could watch their kids, Keeley recognized a business opportunity.

What It Does: Franchises nanny and tutoring services throughout the country.

Keeley started nurturing his entrepreneurial notion as soon as his sophomore year began. He peppered the St. Thomas entrepreneurship program professors with so many questions that they suggested he start attending their classes. “I became an entrepreneurship major by default, because I was so committed to trying to find this knowledge about starting and running a company while in school,” Keeley says.

In the summer after his sophomore year, he placed 12 nannies with local families. The next fall, he was able to bring some real-life case studies to his entrepreneurship classes.

“They say there are three elements of school: a social life, sleep, and good grades, and I had a fourth,” he says. “It likely defied the laws of physics, but I guess that’s why they invented Red Bull.”

Fueled by enthusiasm and caffeine, Keeley generated more revenue his senior year by winning awards—a $20,000 Global Student Entrepreneurship Award from the Entrepreneurs’ Organization, and a $5,000 Pentair Prize for Entrepreneurship from St. Thomas—than his company produced in sales. That’s certainly no longer the case.

Keeley says that the young adults who serve as nannies (the average age is 20 to 25) and tutors (22 to 29) under the College Nannies umbrella are far more than babysitters and homework helpers. The company’s motto is “Building Stronger Families.”

“Families are strong in their own right,” Keeley says. “But if you can help a student get from a C to a B in algebra or solve a child care challenge so a couple can go out to dinner and work on their relationship, they’re going to be a little bit stronger.”

After starting out as a headhunting service putting families in touch with summer nannies, Keeley soon saw he needed to change course. “Most customers paid the nannies cash,” he says. “The problem with that is it’s illegal, and there also are a number of liabilities that both the family and the nanny incur.”

In transitioning to a staffing company for nannies, Keeley had to pay high insurance rates until he could find an insurance partner willing to take an openminded look at a nontraditional idea.

“One of the challenges of breaking new ground is that underwriters are not designed to be welcoming to pioneering thoughts,” he says. “They are designed to analyze risk. And when there’s no data to analyze, that puts them in an uncomfortable position.”

College Nannies & Tutors now plans on expanding into Canada, the U.K., and Australia in three to five years. Keeley says that the company puts a heavy focus on training.

“We’re investing in our people because it’s good for them and increases retention,” he says. “But it’s good for our customers because they end up getting a more knowledgeable, engaged employee who’s in their home caring for their children.”