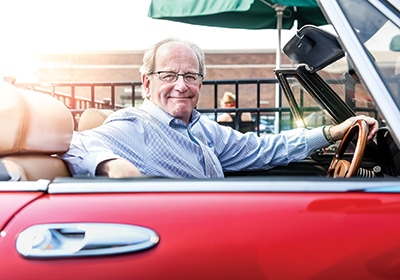 Mike Udermann makes it clear that he owes Don Divine a great deal. Divine has not only been a helpful business mentor. A year ago, Udermann turned to him for advice on something that turned his world upside down.

Let’s start with the business side of the relationship. “Don has provided me guidance on how to take a small company and more than double its revenue over the past five years,” says Udermann, senior vice president of Buffalo Lake-based Kottke Trucking, which operates in 28 states.

Udermann and Divine have known each other more than 20 years and more recently developed a mentee/mentor relationship. “If memory serves me well, I did try to recruit him when I worked at another company,” says Divine, president of Minnetonka-based Lakes Logistics, which provides international freight and supply-chain management services to a variety of firms in the transportation industry. “That didn’t work, but we stayed in touch, and he has called me to talk about presenting ideas to management.”

With Udermann, “I sit down with him, listen to him, help him articulate his financial and business plans,” Divine says. Divine can provide a useful outsider’s view, but he also has a deep knowledge of trucking and logistics. Udermann describes it as an ability to “peel the onion” and get to the core of what’s most important.

“Don helped me understand that focusing on a niche—not trying to be everything to everyone—would help create a winning strategy on building our business,” Udermann says. By focusing on “core markets”—primarily Kottke’s expertise in hauling food products, including perishable items—“we could build density in a key market and provide more equipment and better service to not only our existing customers, but to those customers we were trying to secure.”

“Even if we don’t make the win, if we go through an RFP process and don’t get the deal, I have learned from Don over the years to never give up.”

Last year, Udermann found that he needed that attitude of perseverance beyond the workplace.

That was when he found out he’d been diagnosed with Parkinson’s disease. How should he break the news to his colleagues at Kottke? “Quite frankly, I was in a pickle,” Udermann recalls. “I didn’t know how to proceed.” Though he’d told his direct boss about the diagnosis, taking this to the entire executive team was another story. “No one knows how someone’s going to react when something like this comes up.”

Udermann asked Divine to lunch at Zelo, a downtown Minneapolis restaurant, to seek his advice. Divine, he adds, was “very open and forthright as to how I should proceed.” Very simply: Be straightforward. There was no other way to go about it.

To Udermann’s relief, the response from his colleagues was gratifying. “Their encouragement and support has allowed me to continue to move forward in my work and to grow as a man,” he says. The counsel and guidance that Divine provided “not only allowed me the courage to proceed, but gave me the ability to continue to thrive and grow in my work.”

Udermann says he has a very aggressive case of Parkinson’s and is managing “as best as I can.” Meanwhile, Divine continues to provide “significant guidance on how to navigate my new life with this disease that I now have, and his support and encouragement have provided me that lift that I needed when I was first diagnosed. He continues to be an inspiration to me and provides me with his leadership and guidance in not only my professional life, but in my personal life as well.”

Divine is more modest when he talks about his mentoring work. He describes meetings with mentees as “sitting down and figuring out with them where they wanted to go. I’ve even talked people out of [the] transportation [niche] into other fields, because I knew they weren’t very happy doing what I do. Nothing works like seeing someone happy doing what they’re doing.”

Mentoring has been a passion for Divine since moving into management three decades ago. “At that time, I was responsible for helping set up a sales training program,” he says. “I hired some of the first sales recruits the company had and taught several classes through that program. One of them is one of my very best friends.”

Perhaps what it comes down to is that “I like successful people. I’m energized by them, I like being around them. And when they reach out to me for help in that endeavor, I’m more than glad to help in any way I can.” Mike Udermann can vouch for that.