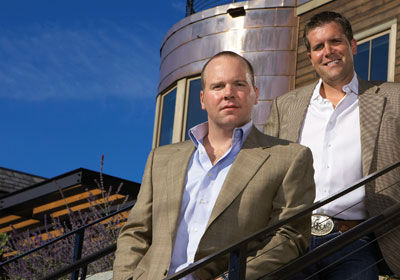 Ryan Gilbertson, co-founder of oil loading company Dakota Plains Holdings, was charged on Wednesday for allegedly operating a stock manipulation scheme that allowed him to collect about $12 million in bonus payments.

A federal grand jury from Minnesota indicted Gilbertson, a resident of Delano, on 13 charges of wire fraud. His attorney, William Mauzy, said he would fight the charges, calling them “unsupportable” and “meritless,” according to the Star Tribune.

Gilbertson helped found Wayzata-based Dakota Plains in 2008 while he was still in the C-suite at Northern Oil and Gas, a company he co-founded a year earlier with Michael Reger. He and Reger, who was once the CEO of Northern Oil and Gas, no longer work at the company, also from Wayzata. Gilbertson resigned as president of Northern in October 2012 and the company’s board terminated Reger last year amid a federal investigation.

The alleged stock manipulation scheme at Dakota Plains was first mentioned in the Securities and Exchange Commission’s indictment against Reger last year. Reger ended up paying nearly $8 million to settle those charges, which are separate from what Gilbertson is facing.

According to Wednesday’s indictment, Gilbertson instructed Dakota Plains to include an “additional payment” provision that stated noteholders would receive bonus payments if the company’s average stock price exceeded $2.50 per share during the first 20 days of trading after its initial public offering. If the average share price grew beyond the $2.50 mark, however, the bonus payments grew in tandem.

Court filings indicate Gilbertson, who owned roughly 40 percent of the company’s notes, then involved Wayzata resident Douglas Hoskins, the manager of his polo team. Gilbertson allegedly sent $30,000 to Hoskins to purchase 50,000 shares of MCT. During the first day of trading, Hoskins began selling those shares under Gilbertson’s direction at an inflated price of $12 a piece.

Stockbroker Nicholas Shermeta, of Minnetonka, then began purchasing MCT shares at the inflated price under his name and his clients names without their knowledge, court filings show.

Their activities, the indictment said, helped push average trading price to $11.30 per share during the period, which resulted in the payout of $32.9 million in bonuses to noteholders. Gilbertson’s 40 percent share roughly translated to $12 million in bonus payments.

“Those individuals who engage in this type of stock manipulation fraud should know they will not go undetected and will be held accountable,” said Shea Jones, special agent in charge of the IRS’s Criminal Investigation office in St. Paul.

Gilbertson, Hoskins and Shermeta are all expected to make their initial appearance in the U.S. District Court in Minneapolis this week.