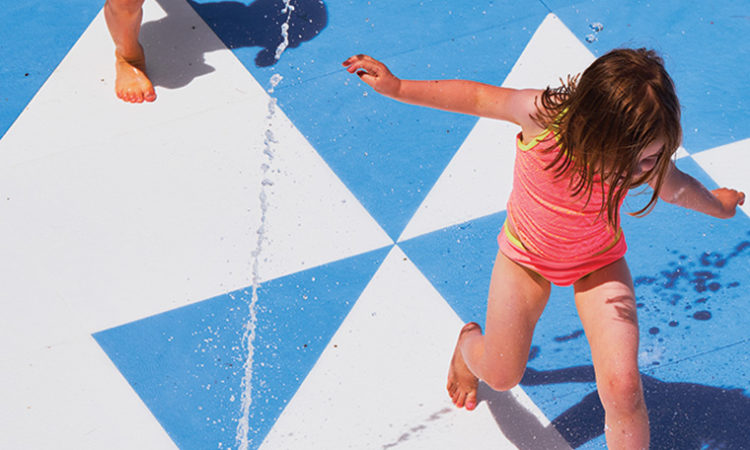 After six years of building and investing in their company, four entrepreneurs are ready to make a splash.
By Kate LeRette
September 29, 2017

Splash pads are on the rise, and Minneapolis-based Life Floor is preparing to take a deep dive into the market with its slip-resistant aquatic flooring. But CEO Jonathan Keller wants to do more than add new projects and clients to the company’s portfolio. “We want to be the industry standard [for aquatic flooring],” he says.

Life Floor, which launched in 2011, manufactures cushioned rubber tiles for waterparks, splash pads and other aquatics environments. The material is both slip-resistant and anti-microbial. It’s also safer than concrete, the current industry standard.

To date, Life Floor has completed more than 1,000 installations for clients, including Carnival Cruise Lines, Six Flags and the Wilderness Resort in the Wisconsin Dells.

In the six years since its launch, much of Life Floor’s focus has been building the company and rebranding its product. Life Floor’s tiles were co-developed in the early 2000s by Pete Nasvik, founder of ThemeScapes, a Forest Lake company that manufactured decorative play structures. (The company is no longer in business.) After two attempts to spin off a company, Nasvik met Keller. Seeing the product’s potential, Keller and his three business partners (one of whom is Nasvik’s son-in-law) purchased the rights to the product and launched Life Floor in 2011.

“We basically had to change everything,” says Keller. “We had to change the brand, build a sales pipeline; we changed how it was manufactured, how it was installed. So in a lot of ways we had to start from scratch, but with a market-viable product.”

In the company’s first calendar year, Life Floor brought in about $500,000 in revenue. Last year, it had $2.25 million in revenue, and Keller expects to bring in $3 million for 2017. Keller’s short-term goal is $10 million in annual revenue within the next three years.

Life Floor has completed installs on every continent except South America and Antarctica. While the waterpark boom occurred in the U.S. in the late 1990s to mid-2000s, says Keller, that boom is just starting to occur overseas in places such as China, the Middle East and Southeast Asia. “Plus, the splash pad boom is occurring worldwide,” he adds.

In 2015, Life Floor partnered with South Dakota-based Falcon Plastics to open its U.S. manufacturing facility. It’s a unique partnership. Falcon Plastics provides the labor, while Life Floor owns the equipment and rents the space, giving Life Floor total control over the manufacturing process without the hassle of finding qualified labor. “We have 17 people on our team, but there are 40 to 50 people working for Life Floor full time,” says Keller. He expects to add another 10 to his team in the next 18 months.

With the influx of Asian customers, Life Floor is partnering with a second U.S. manufacturer, which has operations in China, where it will begin production this month. “We like having dual-source [manufacturing] for risk mitigation and because we do a lot of business in the Middle East, Asia and Australia/New Zealand, so it’s better to have an Asian manufacturer in terms of lead times, shipping costs and our environmental footprint,” says Keller.

Life Floor is also investing in the creative side of its business. Last year, Keller and his team added both a part-time architect from Los Angeles to create custom designs for clients and a new studio design division. The company’s next creative task, says Keller, is adding an application to its website that will enable clients to design their own concepts.

While it’s taken six years for Life Floor to get where it is today, Keller and his team are ready to focus on growing their company. “We believe that we could be a $100 million company easily, just serving the commercial market in the U.S.,” says Keller. “And since we are already serving globally, I think this company could be much bigger than $100 million.”